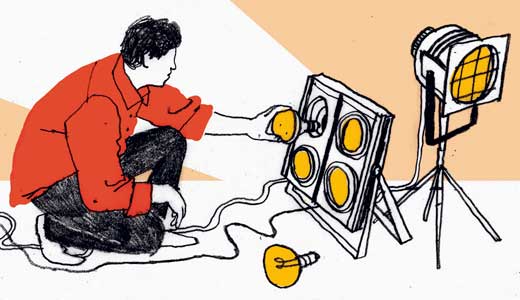 It’s hard out there for the arts. Government and philanthropic support is threatened by politics and economics. Rare are the leaders — national, regional or local — with the vision and courage to state with conviction that the arts are not simply luxurious frills that can be trimmed away in troubled times. In Louisville, an organization that has long played a central role in the city’s vision of itself as a vital cultural center is on the brink of disaster.

Happily, one of the anchor events of the Louisville arts scene continues to thrive and draw national attention. For 35 years, the Humana Foundation has supported Actors Theatre of Louisville’s annual festival of new plays. That is the longest-running active partnership between a corporation and theater company in the United States. It’s a relationship that predates U of L’s first NCAA basketball championship, and, hard as it is to believe, Jerry Abramson’s entry into politics.

It’s also a wistful watershed year for the Humana Festival of New American Plays — the last that will be overseen by the departing Marc Masterson, whose 11 years as ATL’s artistic director have seen the company grow stronger and more innovative year by year.

Three years into a recession, with the arts on the ropes, it’s tempting to discern unifying patterns in the plays that will premiere over the next several weeks. After all, it’s a festival that features visions of the apocalypse, tells of a writer ditching reality in favor of bizarre alternatives, and people whose allergies to the 21st century drive them to seek sanctuary in the company of 1950s re-enactors.

But Amy Wegener, ATL’s literary manager, who read some 700 plays over the year and works closely with the company’s dramaturg and the playwrights as the festival comes together, cautions against looking for signs of the zeitgeist. “There’s never really a theme in the festival,” she says. “That would be antithetical to the spirit of what we strive to accomplish. We’re looking for plays that are written in original, distinct voices, that reflect different perspectives, styles and ideas.”

That’s not to say there aren’t overarching unifying characteristics, though. Wegener notes that year after year — and this year in particular — the plays do explore concerns that are quintessentially American.

Peter Sinn Nachtrieb’s “Bob,” for instance, tells the tale of a hero born and abandoned in a Louisville White Castle restroom, whose drive for greatness taps into an archetypal American narrative theme that plays out as a comic myth complete with rise, reversal and — perhaps — redemption (directed by Sean Daniels, opens March 24).

The uncertain, vaguely understood role of class in American life informs Molly Smith Metzler’s “Elemeno Pea,” which finds a couple of blue-collar sisters plunged into the alluring, affluent life of Martha’s Vineyard, where one of the girls serves as personal assistant to a rich trophy wife — with all the perks, pains, clashes and moral choices such a position implies (directed by Davis McCallum, opens March 8).

On a lonely farm somewhere in Middle America, two lonely youngsters are fending for themselves, trying to forge a future and hold their family together in A. Rey Pamatmat’s “Edith Can Shoot Things and Hit Them.” But then the outside world starts to impinge, and one of the youngsters acts. For every action, there is a consequence, and then more actions and consequences, and those cycles forge us for life (directed by May Adrales, opens March 11).

Obie award-winning playwright Adam Rapp (whose “Finer Noble Gases” premiered at the 2002 Humana Festival) brings his deeply personal vision to bear in an intimate tale of transformation and courage in “The Edge of Our Bodies,” the tale of a young girl, Bernadette, voyaging by train from her New England private prep school to New York City, where she plans to share some important news with her boyfriend (directed by Adam Rapp, opens March 22).

Then there is Chet, the protagonist of “A Devil at Noon,” by Anne Washburn. Chet is a science-fiction writer whose world is beset by malfunctioning magnets, invaded by ants and confused by the sudden appearance of a mysterious woman (directed by Steve Cosson, opens Feb. 27).

More than a few of us are fed up with the pace and turmoil of modern life. But when Katha and Ryu discover they’re actually allergic to the modern world, they adopt a radical coping strategy in Jordan Harrison’s “Maple and Vine.” They dump everything associated with the modern world, including their cell phones, and plunge into the world of 1950s re-enactors, where Tupperware parties are the next big thing (directed by Anne Kauffman, opens March 4).

As you may have heard, the world is supposed to come to an end in 2012 — well before the 36th Humana Festival. To get a jump on the apocalypse, five playwrights (Dan Dietz, Jennifer Haley, Allison Moore, A. Rey Pamatmat and Marco Ramirez) have joined together to pen “The End,” which features the ATL Apprentice Company in an exploration of the end of the world — and beyond (directed by Amy Attaway and Michael Legg, opens March 18).