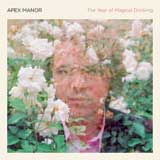 I liked 2008’s Now or Heaven — just enough ’80s and ’90s pop-rock, blended with an overproduced Shins-esque format that didn’t detract from the solid, fresh songwriting. Where would The Broken West go from here? Would its next album be a breakthrough? Then, The Broken West broke up, leaving Ross Flournoy alone on his couch with serious writer’s block. The Year of Magical Drinking is being described as his triumphant return to the table, which, at first, seems like the one inhabited by his previous band. Repeat listens reveal that writer’s block is still intact. A handful of tracks are Yankee Hotel Foxtrot-era Wilco rip-offs, complete with a Jeff Tweedy gruffness (though lacking the genuine, raw bitterness); others, cheap Jets to Brazil. The slick overproduction can’t save the rest, as Flournoy changes his voice to match the lameness of each tune.