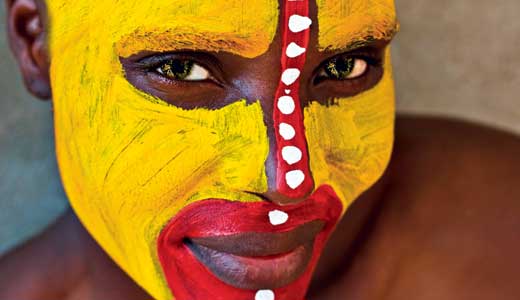 'Orphan of Chao' @ U of L Thrust Theatre

While their respective styles couldn’t be more different, folk ingénue Jolie Holland and TV on the Radio’s Kyp Malone find strains and similarities in the unpredictable turns their set will take Wednesday night. Holland’s forthcoming album, Pint of Blood, represents her further capitalizing on feathery croons and tasteful instrumentation. Malone’s solo project, Rain Machine, mixes elements of bluegrass, jazz and rock for a soundscape that departs wildly from his duties as purveyor of the forward-thinking electro-soul blast reserved for TV on the Radio. The pair alternate as the focus of an evening designed to stretch definitions. —Mat Herron

‘The Orphan of Chao’

The play is a product of 13th-century China, but the African-American Theatre Program at the University of Louisville is fast-forwarding to the year 2111 and transplanting the story to an ecosphere dome surrounded by the desolate, war-ravaged pile of trash that was once the environment. To mix it up further, the story is told from an African-American point of view, dotted with elements of hip-hop and the musical, colorful traditions of the West African Yoruba culture. “It is a story about family, sacrifice, revenge, murder and redemption,” says Lundeana Thomas, who co-directs the piece, alongside Obie Award-winner Paul Carter Harrison and hip-hop expert Kathryn Ervin. The production includes actors from the community, as well as U of L students, and Tony Award nominee Felix Cochren oversees the set design. —Jane Mattingly

If you’re at Comedy Caravan this weekend, you may hear something like: “You’re getting sleepy … you’re getting sleeeepier … 3 … 2 … 1 …” Then you might lose all memory of the next 10 minutes. But that’s OK, you’ll be in the capable hands of Rusty Z, “The Hypno Hipster,” who combines his love of stand-up and a fascination with hypnosis, resulting in a warped show of sorts. Taking the stage with bad lounge music, beret and smoking jacket, it’s clear Rusty Z is in on his own joke, allowing the audience to follow him to the punchline. And if you’re afraid to be in the audience because you don’t know what he might make you do under hypnosis, don’t worry, because he tries his best not to embarrass … as far as you know. —Brent Owen

‘Rosencrantz and Guildenstern are Dead’

Those poor guys never had a chance. Yes, they did kind of backstab their boy Hamlet, but they were just doing their job, right? If King Claudius weren’t such a dick, everyone would probably be partying down at Elsinore, living happily ever after, instead of being poisoned, slain or driven to suicide. How did Rosencrantz and Guildenstern end up in this mess, anyway? The answer to this question, plus a few more, might be found in Tom Stoppard’s tragicomedy, “Rosencrantz and Guildenstern are Dead,” presented by the Louisville Repertory Company and directed by Gil D. Reyes. In this popular 1966 piece, the dynamic duo of Shakespeare’s classic tragedy graduate from supporting-character status and tell their own story, complete with pirates and unicorns. —Jane Mattingly

“‘LoCAL.streets’ is a collection of work centered on the urban environment,” explains curator Dan Pfalzgraf. “The rise in popularity of street (graffiti) art has sparked the interest in millions, reaching new heights in recent years. For every gallery artist taking it to the streets, there are infinitely more whose work is influenced by the streets they live and work around. Many of these artists within the gallery circuit are increasingly utilizing the same tools, materials and styles of their more legitimate street art counterparts … often further blurring the lines between what was once two separate worlds.”

Some of the artists in the exhibition are Julius Friedman, Chris Chappell and Stephanie Potter. There’s a free reception open to the public during the Feb. 4 First Friday Trolley Hop from 6-9 p.m. —Jo Anne Triplett

Let’s go ahead and clear up a few common misconceptions about ballet. It is not boring, and even though professional dancers often find themselves under a lot of pressure, they’re not likely to go all Natalie Portman on an unsuspecting audience. Oh, and ballet is not just for girls. Hold on to your tiara — this is more than just men in tights. Add pointe shoes, tutus, glittery eye shadow and a healthy dose of comedy, and you’ve got the Les Ballets Trockadero de Monte Carlo — an all-male dance troupe that ever so gracefully turns the classic art form upside down with their innovative approach and playful performances. Come early for the “Trocks-n-Frocks” fundraiser, which will include hors d’ oeuvres and Best Tutu Runway Contest, where contestants will reenact the “dying swan.” —Jane Mattingly

The ladies of Va Va Vixens are back to their strip-teasing antics that’ll heat up the stage at the Alley Theater. With a nod to the days of burlesque and vaudeville, “Va Va Valentine” will feature more than 20 beautiful and talented ladies bending in all directions. Expect aerialist acts, dance numbers, acro-yoga, singing, shaking and even a kissing booth. The show, the fifth one from the burlesque troupe, is produced and directed by Christiane Nicoulin and Lisa Frye. If you don’t have a date for Valentine’s Day, now you have 20. Log off of RedTube for the night and go see something you can touch. —Sara Havens

‘Portrait of Artist as Collector’

If you’ve found yourself watching A&E’s “Hoarders,” you’ll no doubt recognize that there’s a fine line between collecting and hoarding. My dad, who brings home junk every time he goes out, is a hoarder. Local artist Caroline Waite, however, is a true collector who can decipher between junk and something of value. In her lecture on Tuesday, titled “Portrait of the Artist as a Collector,” she’ll talk about her passion for collecting and how her wealth of “stuff” gives her joy and informs her work as an artist. “I don’t analyze too deeply what the initial attraction is to this strange mix of collected objects,” she says. “Things mean something for all sorts of reasons.” I’ll tell my dad that. —Sara Havens

‘View From the Pews’

Clara Harris moved to Louisville from Chattanooga 10 years ago and has been active theater, film and voice-over work. Next Wednesday at The Bard’s Town, Harris will read her new work, “View from the Pews,” which is an expansion of her short play “Good Little Church Girls,” which debuted at The Kentucky Girlhood Project in 2007. It is an irreverent homage to her childhood spent growing up in churches and the music she heard during those years. The expanded version, logically, includes music. “I knew it needed to grow into a piece that explored that journey more fully,” Harris says. “Then one day — it was just like a lightning bolt — I realized that the structure of the full-length play needed to hang on the skeleton of the music I sang in church growing up.” Bring your hymnals. —Kevin Gibson

Does the flap of a butterfly’s wings in Brazil set off a tornado in Texas? That question may be an overwhelming gift to an artist. Curator Brian Harper “(aimed) to bring together artists who not only help to enable these changes in our individual perception of what it means to be human, but also those who create artwork that responds to and derives meaning from the changes happening in our contemporary world,” he says. “Much like the flap of a butterfly’s wings, a change in one person’s experience of being alive can therefore cause dramatic changes in the belief system of many.”