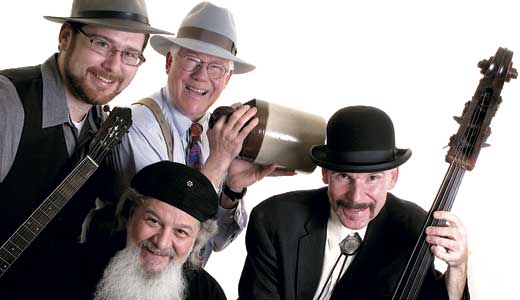 The subtitle averse should probably stay clear of IUS’s 12th International Film Festival. For everyone else, it’s hard to go wrong with this one: Screenings are free, and the odds that you’ll watch an Academy Award winner — or nominee — are in your favor. The Department of Modern Languages has a knack for solid picks and has built on last year’s slate with another Argentine selection. “The Secret in Their Eyes,” which closes the fest on Sunday, took the Oscar for Best Foreign Language Film last year. “Departures,” a Japanese selection that screens on Thursday, won the same award in 2009. Director Michael Haneke’s special brand of evil will be on display Saturday with what is arguably his masterpiece: the two-time Oscar nominee “The White Ribbon” (German). The quirky coming-of-age film “1981” (French via Quebec) will show on Friday. —J. Christian Walsh

Wyatt Center for the Arts

What happens when a woman’s boredom and jealously get the best of her while she has access to guns? She’s also pregnant, so her hormones are raging, and she’s pissed at her new husband for spending half their honeymoon doing academic research. Oh, and her former lover who used to be a drunk has found a new woman and turned his life around. Since Maury Povich wasn’t around in the 19th century, our heroine, Hedda Gabler, had to take matters into her own hands. Bellarmine Theatre has the scoop. “Hedda Gabler is a complex drama — one scholars have debated since its first production,” says Carlos Chavarria, director of Bellarmine’s theater program. “Depending on your own interpretation, the main character, Hedda, can be a villain, a heroine, a victim or a feminist.” —Jane Mattingly

Art Sanctuary at the Alley Theater

That’s something you don’t hear about every day — women in prison. Now, I have to admit, I’ve never actually been to prison, but I’m assuming the women’s isn’t any cozier than the men’s, despite all of that “Camp Cupcake” nonsense we heard about a few years ago. Alley Theater’s latest production, “Women Behind Bars,” will likely answer any questions about the conditions of these, um, facilities, and what really goes down — or at least what they were like in the 1950s. Tom Eyen’s script illustrates the sometimes humorous but mostly shocking goings-on in women’s prisons — where inmates are not only dominated by men in the most extreme ways, but tormented by one another, too. Director Kathi E.B. Ellis seeks to raise awareness about the persisting issues presented in the play. —Jane Mattingly

Remember that “Knight Rider” pencil box you threw away as a kid to make way for your new “A-Team” pencil box? Yeah, someone else could have used that pencil box. Enter Unikids, a charity that provides school supplies — pencils, paper, backpacks, you name it — to children in underdeveloped countries. To raise money and solicit donations of gently used supplies, Unikids will hold a benefit called Taste of Ethiopia on Saturday at the Unikids headquarters on Shelbyville Road. Courtesy of Queen of Sheba restaurant, you can get your fill of doro wot, sega wot, defo dabo (Ethiopian bread) and buna (Ethiopian coffee), among other delicacies — and you’ll be contributing to a good cause. —Kevin Gibson

The St. John Center on Muhammad Ali Boulevard serves more than 200 homeless men every day with its day shelter and social services center, its residential recovery program for those with drug addictions, and its permanent supportive housing program. This annual benefit will help raise funds to cover some of the center’s expenses. The party — a throwback to the 1920s, when people would throw “raise the rent” parties — will feature live music by Thumper and the Plaid Rabbits, hors d’oeuvres, live and silent auctions, games and dancing. “The Depression-era motif is appropriate in these difficult economic times, as many of our neighbors struggle to make ends meet,” says Vince Tyra, sponsorship chair of the event. “Then, as now, people come together in response to a need in the community — helping others get by.” —Sara Havens

The Juggernaut Jug Band has been a Louisville mainstay for more than 40 years now; sadly, longtime guitar player and vocalist Steve “Mr. Fish” Drury died in November 2009, a turn of events that very well could have been the end of the line for the Juggernauts. But Roscoe Goose and bandmates Nick O’Time, Smiley Habanero and Skip Tracer have spearheaded a new all-acoustic JJB show, which will be fully unveiled Saturday at Mulligan’s Pub and Grill (formerly Kaelin’s). “We had to pull together as a group,” Goose says. “It’s a cooperative effort now. We also realized that we never rehearse with a PA, so why shouldn’t we develop this unplugged version of the band?” He says the Juggernauts also are working on an album of original Louisville jug tunes. All of this just goes to show you can’t keep a good jug band down. —Kevin Gibson

In preparation for last year’s opening slot at Freedom Hall for their heroes, AC/DC, singer-guitarists Benny Clarke and Adam Kramer, drummer C.C. Croxton and new bassist Billy Lease sanded away the rough edges. The Broken Spurs aren’t the first to exploit their emotional connections with rock ’n’ roll’s celebratory traits. But on the band’s self-titled follow-up, those emotions rise up for a flawless execution soaked in attitude, from the rollicking stampede of “Natural Disaster,” through live favorite “Shake” and on to searing finale, “Dreamer in My Eyes.” This should dovetail nicely with The Polymorphines’ garage-rock swagger. DJ Glitter Titz closes. —Mat Herron

Not every children’s music group nabs the attention of an HBO documentary or gets to open for My Morning Jacket. The Louisville Leopard Percussionists are back in town this week for their annual fundraiser, the Big Gig. With more than 60 student musicians from the area, the Leopards play an array of instruments — from marimbas to xylophone to congas. This fundraiser will raise money to cover the cost of the instruments, travel and student scholarships. “Most people, when they hear the word ‘student musician,’ think of a dry recital. This is not what you will experience at the Big Gig,” says Diane Downs, artistic director of the Leopards, which she formed in 1993. “Our mission is to provide a comprehensive musical experience for children that enriches lives and builds community.” —Sara Havens

They brand inverted crucifixes onto their foreheads and play songs with titles like “Fuck You God,” so it’s clear Deicide isn’t a boy band. Formed in Tampa, Fla., in 1987, this black metal quartet also has one of the most frightening label signing stories in rock history: Bassist/demonic vocalist Glen Benton reportedly entered the offices at Roadrunner Records, slammed his fists on one of the suit’s desks, and screamed, “Sign us, you fucking asshole!” Deicide just released its 10th studio album, To Hell With God (See a pattern yet?), and it sounds pretty much exactly like you’d expect: terrifying vocals growled with a Satanic intensity, unrelenting, double-bass pedal-fueled drum workouts, and a virtuosic lead guitar attack that’ll make you beg for your life. VIP tickets are $50 and include a meet-and-greet with the band. —Ryan Reed

It’s about to get hot up in the Brown. It may only take two to tango, but 25 of the world’s best tango-ers are stopping by on Wednesday to burn up the stage with their spicy moves, performing “Fire and Passion of Tango,” presented by Brown-Forman Midnite Ramble. Hailing from Argentina, the birthplace of the popular sultry dance, Tango Buenos Aires has been touring all over the world since the 1980s and are known throughout the United States, Europe and the Far East as being the top tango virtuosos. Tango might be derived from mispronunciations of the word “tambor,” meaning “drum,” as it is a very rhythmic dance. The choreography allows for a lot of creativity and calls for the partners to hold each other close. No wonder it’s so sexy. —Jane Mattingly

‘What I Keep: Photographs’

What is your most valued personal treasure, the one that says the most about who you are, once were or want to be? Photographer Susan Mullally asked that question to a number of impoverished people who, by definition, have very little. “I collaborate with members of The Church Under the Bridge in Waco, Texas,” says Mullally, “a non-denominational, multi-cultural Christian church that has been meeting under Interstate 35 for 16 years. I ask each person what he or she keeps, and why it is valued.”

The resulting 60-plus full-size portraits, taken over a four-year period, reveal it’s the simple things, such as a cowboy hat or a watch, that make life a little more livable. A coffee table book of the “What I Keep” photographs was published in 2010. —Jo Anne Triplett

The jurors, Alice Gray Stites of artwithoutwalls, and Suzanne Weaver, curator of contemporary art at the Speed Art Museum, had their work cut out for them. The juried exhibition had more than 300 entries from Kentucky, Illinois, Indiana, Ohio, Tennessee, Virginia and West Virginia. —Jo Anne Triplett