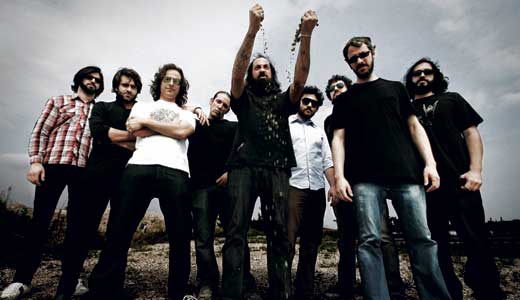 Jared Tankel likes where his band is at right now, in both professional standing and location. As part of Daptone Records, The Budos Band is connected to the most musically diverse scene in all of Brooklyn. But Tankel belongs to a large ensemble that hails from and hones its sound in Staten Island, which has its own version of soul.

“Out of all the boroughs, Staten Island is the most isolated — and because of that, there’s the opportunity to take whatever outside influences are there and make ’em your own,” he says. As the instrumental outfit takes to the road after releasing Budos Band III, the membership has accrued lots of outside influences. “We’ve got the funk and soul in there … European jazz and, more recently, rock.” Tankel, who is often among the members given songwriting credit for the band’s tight tracks, knows about the commitment that’s demanded as you follow influences — it’s why he left behind his original alto sax. “I was listening to Afrobeat, and the baritone was the best way to take my sound in that direction,” he says. “I really liked the rhythmic nature of it, and that bass nature — that ‘beatness’ of it.”

Rhythm is important to the Budos sound, but so is the punch of the horns. Individuals can get opportunities to stretch out, but this outfit is far removed from anyone’s concept of a jam band with brass and reeds. Between tours, they indulge in Monday-night beer-fueled sessions at their rehearsal space in a former evangelical church, where ideas bounce back and forth among the extended musical family. The line-up’s remained constant for years, and as Tankel puts it, they’re “not afraid to call each other out if something sucks. There’s a real importance to understanding what the band means as a whole.”

One good listen makes clear that they’d jump at the chance to do soundtracks. Tankel agrees. “A Tarantino movie would be cool. One movie a bunch of the guys really liked the score of was ‘There Will Be Blood.’ Something that’s sort of dark with a combination of big, open shots with some amount of action.” Tankel says some listeners hear the sounds of blaxploitation film soundtracks in the band’s work to date, but he isn’t buying it. He enjoys the way their mix now includes little side trips that veer near some of the hardest rock going (“We all universally love Sabbath — the metal of all metal”) and dazzling new looks at some classics, like “Yad Reppirt,” which turns The Beatles inside out.