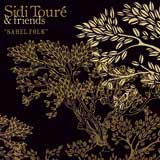 Although Sahel Folk is Sidi Touré’s debut for Chicago-based Thrill Jockey records, the Mali-born singer and guitarist is no stranger to the international music scene. In 1976, a young Touré joined the Songhai Stars, one of Mali’s famed “regional orchestras” that frequently toured the western Sahel (the transitional zone between the Sahara Desert and the sub-Saharan savannas of Africa). On Sahel Folk, Touré addresses issues concerning his countrymen on songs like “Adema” (about his country’s continuing modernization), while his guitar playing retains a loose, casual yet melodic feel enhanced by the album’s you-are-there approach — apparently it was recorded in the living room of his sister’s house, over cups of tea, with a maximum of only two takes per song. Sahel Folk’s beautifully hypnotic melodies should provide fans of Ali Farka Touré and Bassekou Kouyate plenty of reasons to love Sidi Touré.