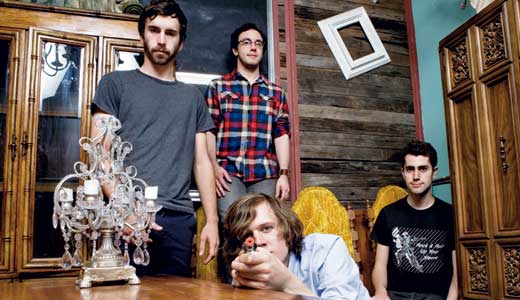 Newmarket, Ontario may have produced Jim Carrey, but musically, it was a virtual dead zone for the kind of sarcastic, carefree pop rock Tokyo Police Club enjoys making.

“It legitimized the idea of being a band and made us reconsider being professional students,” says Alsop, an Elvis and Beatles disciple who was pursuing a degree in screenwriting and film production before dropping out. “I’d probably be struggling in Toronto right now if I had stayed in school.”

Post-festival, the band signed to Toronto imprint Paper Bag and released several EPs, beginning with its 2006 debut, A Lesson In Crime, followed by appearances at Lollapalooza, Reading, Glastonbury and Coachella. A full-length, Elephant Shell, was released in 2008, and the band closed out that year opening up for Weezer for six weeks.

In 2009, Tokyo Police Club began work on a follow-up with producer Rob Schnapf (Elliott Smith, Guided By Voices, Beck) for reasons that are simple: They were fans.

“We’re all huge fans of Elliott Smith, The Vines and Beck, but mostly it was our initial conversations with him,” Alsop says. “He seemed to be someone who understood what we were going for. We wanted someone to give us direction when we want direction, and come along for the ride when we’re really feeling something.”

The resulting feeling is Champ, a synth-driven pop collection glued together by competence. Monks still sounds like he was born in 1987, but his vocal delivery has a road-worn satisfaction. You can hear that in opener “Favourite Food”: You know it’s sweet, gettin’ old.

That’s no accident, as Alsop explains. “We’re trying to find ourselves a little more and get comfortable writing songs in a way where we could kind of just take them in a direction they felt like they wanted to go.”

Which is forward. Tokyo Police Club’s current trajectory hasn’t led them anywhere else, and the resultant growing pains have been balanced by perspective.

“At the end of the day, all this is kind of just a job. It’s an amazing job, but it’s your art as well,” Alsop says. “You have to choose your battles and understand that a lot of times if you’re about to get upset over something, take a step back, and realize that you’re still getting to travel the world with your best friends, so you count your blessings with that.”

All of the band members live in Toronto, but their success has had tangential effects 15 miles north in Newmarket, where the musical climate has diversified beyond punk, ska and metal they grew up avoiding. “There’s groups like Ruby Coast, a legitimate venue opened up a couple of years ago,” Alsop says. “It’s starting to blossom a little bit more.”

Their hometown’s transitions have resulted in a sense of civic pride. “Depending on where we go, we’ll say we’re a Newmarket band.”