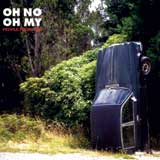 It’s been five years since we’ve heard a peep from Austin-based pop outfit Oh No Oh My. They don’t call, they don’t write, and next thing you know, they’ve made a new, less cute record. Their self-titled debut garnered positive comparisons with The Shins and Simon & Garfunkel; People Problems is the band’s effort to plant its flag in the latter camp. Oh No Oh My wants badly to write songs that explore topics more thought-provoking than the weather and kissing (two major themes of their first record). The songs are catchy and charming, but their attempt to be the thinking man’s twee rockers ends up feeling awkward and forced. Oh No Oh My is adorable — they would do well to stick to handclaps and whistling and leave the heavier stuff to less precious fellows.