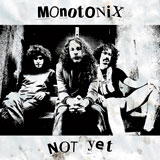 Recordings don’t do Monotonix justice. You can’t just listen to them; they have to be seen and felt. And smelled. The Israeli trio’s reputation as a live band is near mythic; audience and performers alike face imminent danger. It’s the sort of thing that’s tough to capture on wax, and the band still hasn’t figured out how. With that said, guitars crush on Not Yet, slogging through boogie-woogie riffs and rolling them into heavy boulders. With no bass player on board, the tone is perfect. On past recordings, Shalev’s vocals tended to get a little buried in the mix, and a few songs on Not Yet make the case for putting them back down there. But this is adequate and sometimes powerful garage rock, even if the songs themselves are often secondary to their live incarnations. Like the rest of their catalog, Not Yet is a memento, a keepsake that says, “I survived the Monotonix.”