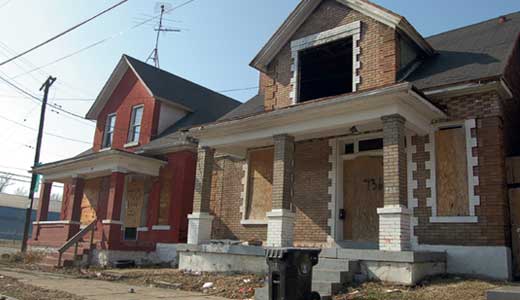 On the edge of 24th Street and Maple, two houses sit dormant like a pair of gutted brick Sphinxes. Quiet and unassuming, their broken windows and boarded-up doors bear a message in black spray-paint — “no copper” — that’s more of a warning than a riddle to would-be pipe-marauders. Birds fly into and out of the non-existent windows, claiming a refuge their human counterparts have long since abandoned. Walk a block in any direction, and you’ll see more of the same.

Far from an anomaly, these abandoned buildings are two of an estimated 7,000 vacant properties scattered about Jefferson County, a number that has increased steadily with the rise in foreclosures, particularly in the Louisville’s West End.

“We have over 7,000 properties that are in a foreclosed situation, and it’s caused a lot of problems,” says state Rep. Dennis Horlander, D-40. “First of all, the property’s not maintained. Second of all, we have squatters who just come onto the property and start living there. And then there are problems with juveniles (breaking into them). I’m trying to basically come up with a formula so that when this happens … government knows who to call.”

In an effort to curb the epidemic, the Louisville lawmaker has filed two bills in the Kentucky House (HB 82 and HB 128) that would essentially require creditors to register vacant properties with local governments and banks to register foreclosed properties (instead of languishing for months on end on the market) or face fines and fees.

“What it boils down to is that if government has a contact that we can get to, that would be very helpful,” Horlander says.

Under existing state law, the owner of any given vacant property — say, Bank of America, for example — is not required to keep sufficiently clear paperwork on whatever property they might own, so that once it’s been foreclosed and overrun with weeds, squatters and maybe the occasional arsonist/pack of junkies, Louisville Metro doesn’t know whom exactly to slap with property violations.

Along these lines, the city is owed $254,000 in property maintenance violations, according to The Courier-Journal’s online database of bank-owned foreclosed properties, which excludes an even larger cost of lost real estate value in the equity of homes located in the same neighborhood. Some, like Louisville attorney and foreclosure specialist Ben Carter, think this number should be a lot higher.

“Indeed, until the cost is greater, out-of-state banks will have few incentives not to foreclose and decide not to invest in ‘unprofitable’ properties here in Louisville,” Carter writes on his blog.

And because banks bundled mortgages into securities and traded them like STDs at the Playboy Mansion, it’s impossible in many cases to tell which bank owns what property.

“The problem is, so many of these houses are vacant, and with all the different mortgage companies throughout the country that have sold and bought mortgages, nobody really knows who owns some of these properties,” says Bert May, a contract lobbyist for the Kentucky League of Cities. “Sometimes it’s hard to keep up with who the legal owner would be once it’s been repossessed.”

A Jan. 25 report prepared by the Louisville Metropolitan Housing Coalition reveals the overwhelming majority of Jefferson County’s vacant properties are concentrated in west Louisville, which consequently boasts the city’s highest concentration of foreclosures as well.

According to the report, the West End’s foreclosure epidemic and its resultant vacant property concentration combine with other factors to negatively affect “the outcomes people often seek in their home environment and neighborhoods,” and that those who live in these neighborhoods do so not by choice, but by a lack of choice imposed upon them by abandoned buildings and the like.

“The estimated foreclosure rate by Louisville MSA census tracts for 18 months ending June 2008 shows that the geographic areas with high concentrations of persons in protected classes (i.e., people legally protected from discrimination) also experienced the highest foreclosure rates in Louisville Metro,” the report states. “Further exacerbating deteriorating conditions are the high numbers of vacancies in these areas and the loss of value of the homes in these areas.”

Doug Magee, Metropolitan Housing Coalition program director, thinks these bills will be a good step for the West End and other urban Kentucky neighborhoods — “assuming (the bills) don’t die in a Frankfort committee,” he says — primarily for their impact on safety and
quality of life.

“Part of the problem we’ve been running into with neighborhood associations throughout the city is the effect that vacancies have on neighborhoods,” Magee says. “When a piece of property becomes vacant, sometimes it doesn’t get boarded up, or maybe somebody breaks in anyway, and those kinds of things become problems.”

Magee lives on East Broadway and says that within the last couple of years, “there’s been at least two fires within a block of me basically because some folks — homeless, or folks anticipating being homeless — got into the units, were heating themselves inappropriately, and set fires.”

Other local efforts to combat the problem have been met with mixed results at best. In October 2010, Metro Council published a list of so-called deadbeat landlords in an effort to shame them into taking better care of their properties. Controversy ensued when one of the property owners named on the list, Warren Jackel, accused the council of incorrectly naming him and vowed to end a career of home rehabilitation in the West End.

“Personally, shaming doesn’t seem to generally work,” Magee says. “Some owners paid their bills as a result, but it didn’t do much to solve the problem.”

He adds that the Jefferson County Landbank Authority, founded in 1988, has slowed its efforts in recent years to acquire and turn vacant properties into subsidized housing, and he hopes that newly minted Mayor Greg Fischer will lead efforts to reinvigorate the Landbank’s mission.

While campaigning for mayor, Fischer unveiled his “Neighborhoods Plan,” which includes selling vacant and abandoned homes for $1 and providing no-interest loans to prospective homeowners for their rehabilitation. In an October interview with LEO’s editorial board, Fischer acknowledged the talking point as something he couldn’t accomplish without legislative assistance from Frankfort.

Mayoral spokesman Chris Poynter says the mayor supports legislation to this end, as there’s little that can be done from a local level to combat the tentacles of national creditors.

“The big issue for us with vacant properties is that Kentucky is a very pro-property rights state,” Poynter says. “So it’s not easy to get control of these properties … we really need help from the state to give us more authority to do stuff on the ground, because we just can’t go in and take a property. It’s quite a lengthy legal process.”