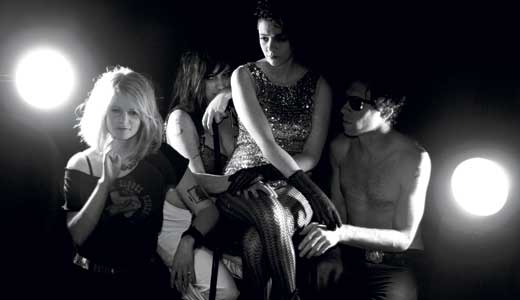 Don’t get the wrong impression from the band name; there’s nothing “darling” about Those Darlins, the three-fourths-female garage-pop quartet from Murfreesboro, Tenn. Still in the infancy of their music career (their countrified, self-titled debut came out in 2009), the Darlins — vocalist/guitarist Jessi Darlin, bassist Kelley Darlin and baritone ukulele player Nikki Darlin — have stirred up a reputation as foul-mouthed, tattooed girls who relish a drunken after-party.

Jessi Darlin welcomes with a big helping of Tennessee warmth, not an F-bomb or drunken rambling to be found. Which isn’t to say Jessi isn’t a proud Southern female. But, as she tells it, there’s no need for women to be defensive about making music in a male-dominated field: “I think most female musicians right now that aren’t in the pop music industry do a pretty good job in general.”

She has a point. In a way, it’s hard to think of a time in recent memory when more females were rocking out. Jessi cites Best Coast and Vivian Girls but also lesser-known Shannon and the Clams, of Oakland, and The Coathangers, of Atlanta.

But being from Tennessee — not bothering to hide their accents and certainly not shying away from Appalachian musical forms — Those Darlins unlock a whole new batch of stereotypes. She cites Atlanta’s Black Lips: “They don’t play ‘Southern’ music, they play rock ’n’ roll, but they definitely keep a good bit of where they’re from in the music, and I think that’s cool.”

The whole time, I wait for Jessi to explode, for one of my questions to press a sensitive button. Instead, she’s cordial and patient, conversing like we’re old friends at a bridge table. Wait a minute — are these the same Darlins I read about?

Maybe the cordiality is due to a sense of ease. Their forthcoming album, Screws Get Loose, answers a lot of questions on its own. A bit of a new direction, the album downplays rootsier edges in favor of jangly, edgy indie rock.

But, as Jessi says, “new direction” is a bit of a misnomer: “Country, blues and gospel — you mix ’em all together, and that’s where you get rock ’n’ roll. People ask us about this switch, but for us, it’s really not all that weird of a change. It’s pretty natural.”

Natural looks good on them.