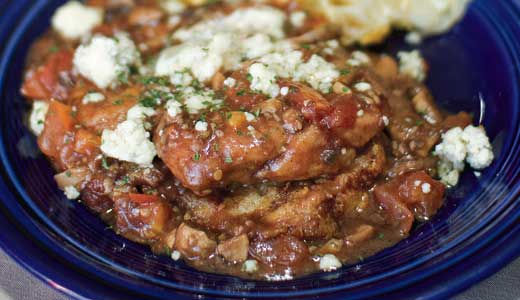 Local historians argue to this day about whether the Harrods Creek community (“Harrod’s” Creek before the U.S. Postal Service deleted the nation’s apostrophes) takes its name from Capt. William Harrod, one of Louisville’s first settlers in 1779, or James Harrod, the pioneer explorer who founded a fort at what is now Harrodsburg, Ky., in 1774.

Although conventional wisdom remains divided, the good folks who operate J. Harrod’s show no apparent doubt, hoisting the name with pride over the comfortable Harrods Creek-Prospect eatery they opened in 1994, a mere 220 years after James Harrod built his fort.

The restaurant hasn’t been around as long as its namesake, but its 17-year heritage is more than long enough to have established it as a neighborhood institution of some renown. Its reputation was enough to draw our party of five out to the Creek for a recent after-work session of food, drink and sociable conversation. J. Harrod’s is admirably suited to all three activities.

Its roadside quarters on Upper River Road, just short of its junction with U.S. 42 in Prospect, may appear a bit generic from outside, but step in and you’ll find a warm welcome from host Michael Francis and his friendly staff, and a scene that looks and feels a lot like a club anybody could join.

A cozy bar is on the right; the dining room extends through the left-hand side of the building, with green tartan wallpaper, sconce lighting, a warm fireplace, and a collection of art ranging from Ireland posters to a drawing of My Old Kentucky Home. Soft background music fits the sociable scene.

While we looked over the menu, we were invited to order a cocktail, beer or wine (many selections, in roughly the $7 to $9 range, were available by the glass). I enjoyed a glass or two of the modest but tasty Five Rivers California Pinot Noir, served brimful, and a decent match for my eventual dinner picks.

The menu is firmly based on comfort food, but it’s well made, a couple of notches too refined to rate as mere “roadhouse.” “Beginnings” (appetizers) range in price from $3.75 (for the soup of the day) to $8.75 (for fried frog legs). Something plain? Try the chicken tenders ($7.25). Something fancy? Go for baked Brie in pastry ($8.25). Sandwiches, served with fries, are $10.25 (for a grilled-chicken club, Icelandic cod or the half-pound Prospect burger) or $11.25 (for a prime rib sandwich).

Some two dozen main courses are subdivided, somewhat inscrutably, among “classics,” “from our grill,” “pasta” and “seafood,” and range in price from $14.95 (for boneless fried chicken) to $22.50 (for a 12-ounce ration of slow-cooked, certified Angus beef prime rib). Most dinners fall in the teens; portions were generous and, in most cases, came with a choice of two sides.

Mary and I, along with our friends Ann, Susan and Ed, split a pair of appetizers and had plenty to go around: Fried green tomatoes ($5.95) were near-perfect — five thick, tangy rounds coated in a thin, golden breading, crisp-and-crunchy on the outside, steamy and tender within.

An appetizer-size order of the chicken livers was so tasty they prompted Mary to order a full plate ($16.95) for her main course. Tender and flavorful, definitely meant for organ-meat lovers, they were good on their own, enhanced with the flavors of the sweet onions and strips of salty country ham they’d been sautéed with.

My dinner, chicken Del Greco ($17.95), featured an airline chicken breast (boneless cut with the drummie attached), thick and crisply breaded, perched atop several rounds of fried eggplant and covered with a tangy tomato-wine sauce made with lots of garlic and mushrooms, topped with crumbled blue cheese. It was an unexpected mix of flavors and textures, but it turned out well, exuding a Greek vibe.

Side dishes were consistently good, including country-style green beans with plenty of flavor, cooked through but not to death — house salad of mixed greens with a blue cheese dressing, and creamy mashed potatoes with mom-style brown gravy that got Mary’s two thumbs up.

Desserts had lots of “nom nom nom” noises going on around our table. Several of our revelers inhaled individual-size cherry pies. Mary approved of her homemade peppermint ice cream, creamy and minty and not too sweet; and I, not usually a big fan of desserts, enjoyed a rich bourbon bread pudding suffused with caramel and topped with “hard” sauce.

Management had no problem splitting checks for our party of five; our share, including the wine, seemed worth a lot more than the affordable $61.54 toll. Friendly, on-the-spot and unobtrusive service earned a $13.46 tip.