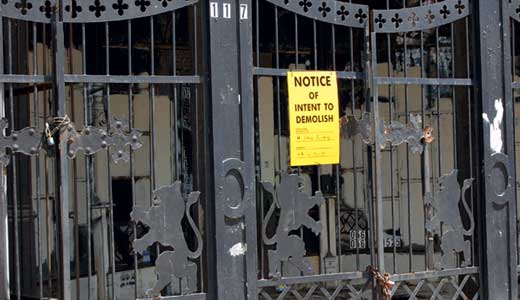 In a surprise announcement last week, Mayor Greg Fischer said the city and developer Todd Blue have reached an agreement that allows the Louisville businessman to demolish a row of 19th-century buildings along Main Street.

For the past year, Blue has fought with city officials and preservationists over the Iron Quarter, an ambitious development project that involves razing seven historic buildings along the Whiskey Row corridor downtown.

“We don’t want to celebrate the demolition. What we’d like to celebrate is it being a new day in Louisville,” says Blue, 42, president and CEO of Cobalt Ventures. “We wanted progress, and for the city to not be defined as a city of obstruction or preventing opportunity and growth. I don’t think Mayor Fischer is on our side, but he’s pro-business and trying to move this community forward.”

Despite the likelihood of complete demolition, Fischer plans to ask Metro Council to appropriate a minimum of $450,000 in the upcoming budget to help cover the cost of preserving the structures’ facades. However, Blue tells LEO Weekly that his company has no intention of saving the facades because it would be “cost-prohibitive.”

“Our proposed plan is recreating the architectural images of those facades in exactly the way they are today,” Blue says. “With today’s technology, you can recreate exactly what’s there. We can show you where the paint’s chipping off. It’s done around the country and is celebrated. We’d love to do that.”

Under the terms of the deal, demolition could start as early as May, which happens to be National Preservationist Month. In the meantime, the city will help investigate ways to either preserve the facades or recreate new ones with a similar architectural appearance.

And though Fischer has called the settlement a “compromise,” Blue conceded nothing other than agreeing to drop his lawsuit against Metro government.

Officials with the Fischer administration say they cut a deal due to the potential for an unfavorable legal ruling, adding that the Jefferson County Attorney’s Office warned a federal judge could order the buildings to be demolished immediately. But Bill Patteson, a spokesman with the county attorney’s office, tells LEO that was just one of the legal scenarios given to the mayor; there also was the possibility of a win in court.

Last year, Cobalt Ventures hired a private engineer who determined the buildings were a safety hazard and needed to be torn down. Former Mayor Jerry Abramson disagreed with that assessment, highlighting a report funded by the Downtown Development Corp., which suggested they were salvageable.

The city denied Blue’s emergency demolition request, and a united front of preservationists hurried a petition drive that resulted in the Metro Landmarks Commission granting the buildings a protected historic status.

The resulting stalemate prompted Blue to file a federal lawsuit against the city. When asked about the standoff, Blue alleges Abramson blocked the project due to a longstanding personal vendetta.

“I definitely, 100 percent feel that Jerry had a grudge against my family and me,” he says. “During the Iron Quarter negotiations, we walked into the meeting and — I’ll never forget this — he shook his finger at us and yelled, ‘I don’t want to go to war with you again.’ So I would say there’s no question there was a grudge.”

The first clash between Abramson and the Blue family occurred almost two decades ago over the Louisville Scrap Material Co., a company Blue’s father owned near what is now Waterfront Park. After years of litigation, the Blue family sold their property, making room for Slugger Field.

Built in the 1850s, the cast-iron buildings that make up Whiskey Row have a rich history, originally serving as distilleries, before being repeatedly reincarnated as various businesses, nightclubs and apartments over the years.

In 2007, Blue purchased the long-vacant buildings for $4.3 million with plans for an ambitious $50 million development. But the recession stalled the project, and the buildings have remained an eyesore.

Local preservationists scoff at Blue’s suggestion that the history of the buildings can be reproduced.

“Look up and down Main Street — people have done fabulous things with preserving old buildings right next door to Mr. Blue’s properties,” says Stephen Porter, an attorney for Open Louisville, a preservationist group. “There’s nothing that says you can’t preserve the facades of these buildings and still construct a fantastic project behind them.”

City legislators also are concerned with the fate of the buildings, and before forking over nearly half a million dollars in taxpayer money, they want to review details of the agreement.

“You would find in general that we’d prefer preservation as opposed to recreation,” says Metro Council President Jim King, D-10. “The council might approve an expenditure to preserve the facades if the city has ownership of them … It should be a loan, possibly that’s forgivable if the facades are kept in place with a new structure, or it should be a purchase of the facades by the city to allow us to control their destiny.”

Council members were not made aware of any negotiations prior to last week’s announcement, and some were surprised by the speed with which a settlement was reached. While acknowledging Fischer is trying to clean up past problems, King says city lawmakers have lingering questions.

Meanwhile, local preservationists are mulling over what steps to take next and waiting on the city to share details of the agreement, which is awaiting final approval from Blue’s attorney in federal court, according to Patteson.

Until then, several organizations have contacted the Mayor’s Office in an effort to meet with Fischer, saying they are prepared to take whatever action is necessary to protect the city’s heritage.

For Blue, however, getting past the legal wrangling with the city was the most important step. In response to criticism from preservationists, he says:

“In a perfect world, it wouldn’t be my hope and dream to demolish these properties. We’re a seasoned and documented preservationist company in the work we’ve done downtown, which seems to go undocumented in the media. But if they are so passionate, if they care so much about these buildings and it’s so important to them: go raise money, get some partners, buy the buildings and go develop them. Otherwise, let me do my project.”