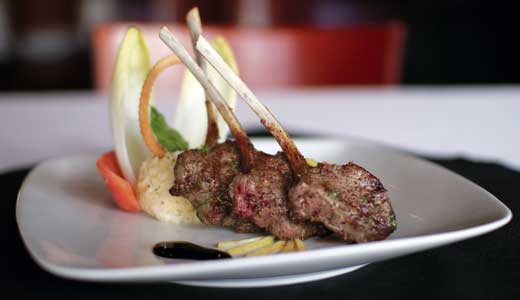 So, what kind of restaurant is this new Majid’s St. Matthews? Is it Iranian? Yes. Mediterranean? Sure. Is it American? That, too. Majid’s is affordable, but you can go pricey. It’s a great bar, and it’s a classy dining room. It’s casually dressy and upscale casual. In short, it comes about as close to being all things to all people as a restaurant can.

This amiable approach reflects the style of owner-restaurateur Majid Ghavami, who assimilated the principles of high-level service at the storied Casa Grisanti, Mamma Grisanti and Vincenzo’s. He refined this quality-and-service tradition at Saffron’s, which he opened downtown in 2001, and at Volare, where he remains general manager.

His latest venture, Majid’s, arrived during the holiday season in the beautifully redesigned Chenoweth Square space that has housed a string of short-lived, forgettable bars-with-eateries after Rick Dissel closed Rick’s Ferrari Grille here to open Blackstone in Prospect.

The restaurant has been stylishly reimagined in cool, attractive colors of lavender, silver and black; the walls that once isolated the restaurant’s bar and dining room have been removed to convey a more open feel. Staffed with some of the city’s top pros in service, in the kitchen and behind the bar, Majid’s makes you feel welcome and satisfies your hunger as it calms your spirit.

The menu includes some of Saffron’s favorite Iranian dishes but goes far beyond. The bill of fare spans the Mediterranean, the Middle East and Central Asia to incorporate, as Ghavami says, all the lands that once fell under the domain of Cyrus the Great, the Bronze Age emperor who precedes Alexander of Greece and the Caesars of Rome in the history books.

All that, and America, too: Where else can you find shrimp and grits ($6), Persian eggplant Kashke Bademjon ($6), clam chowder ($5) and Greek pastitsio ($19) all on the same menu?

Let’s take a closer look at that menu — or, I should say, menus, as you can choose between a Persian-accented international dinner menu in the dining rooms and an eclectic selection of affordable small plates in the spacious bar. Drop by at lunchtime for a more concise selection with midday prices.

The dinner menu features a dozen main courses from Executive Chef Charles Reed and Chef Aaron Springer, priced from $17 (for a Persian-style veggie kabob) to $29 (for a skewered rack of lamb shashlik). A grilled Black Angus New York strip steak, American style, is $25, and grilled salmon is $19.

Step over to the bar, where mixologist Stephen Dennison presides, and select from about 14 small plates. The dining room’s pricey lamb becomes snack food here, at $3.50 per bone for finger-food lamb “pops.” Other small-plates range from $5 (for many dishes including smoked salmon crostini, creamy New England clam chowder or the Persian Mast-o-laboo, a cool mix of beets, walnuts and spices in rich house-made yogurt).

There’s a full range of libations, including Dennison’s creative cocktails. The wine list, like the cuisine, covers the world, with special focus on the wine-producing countries of Cyrus’s empire, from Greece through Lebanon and Israel to India. Half-price bottles are offered every night.

We’ve been in several times for lunch and dinner, have tried quite a few of the offerings, and haven’t found a thing to gripe about in food or service.

To highlight a few, the shrimp and grits ($10 for lunch, $6 as an evening small plate) makes a few variations on the standard theme, mixing smoked cheddar into the grits and topping a trio of oversize shrimp with a piquant, Creole-style étouffée.

Stuffed quail ($10) makes a mighty fine appetizer, grilled crisp-skinned and juicy, glistening with a sweet glaze and perched on a hearty cardamom-flavored stuffing of apples, walnuts, onions and golden raisins, plated on a golden cinnamon gastrique.

I followed the quail with roasted duck ($24): half of a duck, roasted until tender and touched with just enough of an orange-marmalade glaze to accent its deep, rich flavor. It was served with crisp yet tender green beans and, in place of the usual roast potatoes, a seductive wedge of buttery potatoes Anna.

The rack of lamb ($29 for dinner, $15 for a half-rack at lunch), echoes a Saffron’s favorite and seems likely to become a favorite at Majid’s: Juicy loin chops came sizzling from the grill, medium-rare as ordered, gaining an exotic scent from a dusting with Persian sumac. They were served with sides of dill rice, pickled carrots and grilled veggies.

Along with my dining companions, I’ve long been singing the praises of the creamy clam chowder ($5); the earthy Kashke Badjemon, served with pitas ($6); the herbal and alluring vegetarian Ash e Reshteh noodle soup ($5); and the Southwest Asian roasted lemon chicken ($19).

With a bottle of an intriguing Israeli wine, Barkan Pinot Noir from the Negev Desert ($19 on half-price sale), our share of dinner for four with our friends Bob and Sharon came to a reasonable $92.22, plus a $20 tip. Lunches have ranged from the abstemious (about $10 including tip) to the expansive ($39 plus tip).