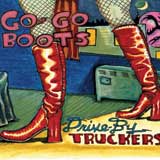 Country has a relationship with tradition that indie rock cannot claim. Within indie, any formula that sets out a rote way of doing things is something to avoid, or at least reinterpret. So when country-ish indie band Drive-By Truckers use clichéd “country”-twanged voices to sing “country” songs, it doesn’t strike me as part of the tradition, just cliché. Go-Go Boots’ first half is dominated by this country twang over plodding, monotonous tempos. The second half drops a lot of clichés, changes tempos and introduces lyrical themes that haven’t been explored a thousand times before. “Used to Be a Cop” is a minimalist, creeping, krautrock-ish take on country, and if the twang does come around again in later songs, the voices sound more natural to the band when they sound more foreign to the music.