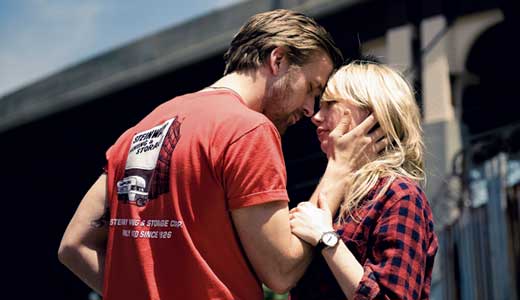 At what point does a relationship go sour? Is it an event? An argument? Hidden agendas? Words left unsaid? Too many words said? “Blue Valentine” examines the highs and lows of Dean (Ryan Gosling) and Cindy’s (Michelle Williams) unraveling marriage. The story brilliantly mixes present-day scenes of a couple who can barely stand each other’s company, with flashbacks of two individuals falling in love and vowing to take on the world together.

Most of the heartbreak and sadness of the present-day couple is felt rather than seen, which is a testament to Derek Cianfrance’s direction. Stark close-ups and attention to detail over dialogue (at times) make the tension between Dean and Cindy tough to watch. A scene of Cindy pulling away from Dean’s touch was far more powerful than a scene of them bickering.

The acting in “Blue Valentine” also should be commended. Gosling and Williams have amazing chemistry — even when they’re fighting, you hope they’ll just stop and make out. And just when things get too depressing on screen with their current relationship, a flashback comes along and breaks the tension, harkening the naive romance of “The Notebook.” Dean is a blue-collar house painter who loves the freedom his job allows, even though he could get a better job if he applied himself. He’s laidback and content with the status quo — it allows him to paint, make people happy, and come home to his wife and young daughter at a reasonable hour.

Cindy, however, wants more from him and is disappointed he’s not living up to his potential. She put herself through med school and now works as a nurse in a doctor’s office. Her unaffectionate attitude toward Dean is gut wrenching. Dean flirts with her, trying desperately to be acknowledged. At the breakfast table with his daughter, he encourages her to take the raisins out of her oatmeal and eat them off the table like an animal. Cindy rolls her eyes in disgust and throws out the oatmeal, ruining the moment the two were sharing.

In a last-ditch effort to fix the relationship, Dean makes a reservation at a motel, against Cindy’s wishes. “We need to get drunk and make love,” he pleads. It’s on the way to the hotel that we begin to see where the cracks in the relationship began. Cindy grew up with parents who were in a loveless marriage, and she vowed she’d never end up that way. While the past shows a Cindy who was upbeat and excited about what the future held, the present paints an entirely different picture. She’s lost any zest for life — especially if that life includes her husband.

“Blue Valentine” doesn’t answer any questions about love and loss. It just puts a magnifying glass on the cracks and crevices of a relationship many can, unfortunately, relate to.