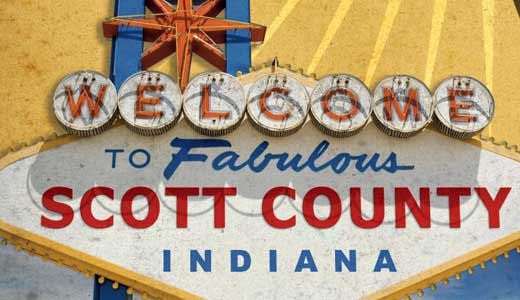 If you build it, they will come. Provided there’s ample parking. And the weather cooperates. And there’s nothing decent on TV. So goes the lament of film fest organizers everywhere. Although these galas are something we generally claim to enjoy — some would even call them a key strand of a city’s cultural fiber — too often our good cheer is not reflected in ticket sales. Louisville is fortunate to have three distinct, large festivals vying for eyeballs, and this weekend marks the return of one of them: the Derby City Film Festival.

Kristofer Rommel, DCFF’s spirited creator, programmer and promoter, hopes to ward off festival fatigue with an assortment of indie fare. Asked to differentiate Derby City from Louisville’s other big fests (Flyover and The International also are entering their third seasons), Rommel assumes an indier-than-thou stance, pointing to his million-dollar budget cap for selected films, as well as the festival’s mostly locavore appetite.

“We’re not Indiewood,” Rommel says, referring to the red carpets and splashier titles offered by his counterparts. “I think that’s where we differentiate. We try to show what I call the true independent filmmakers — those not attached to a studio.”

Derby City’s third season will include zombies, female wrestlers, Appalachian mobsters and a slew of urban crime dramas. In fact, all of the short films in the competition feature guns or drugs or both, with the exception of one. (That exception happens to end in a double suicide.) Rommel claims the trend reflects the sensibilities of area filmmakers more than the tastes of his selection committee, attributing the season’s heavier mood to an uncertain economy.

If firearms aren’t your bag, look for Derby City’s nonviolent offerings, which represent some of the fest’s best work. Particularly moving is the hour-long documentary “Our House,” which follows a group of anarcho-Christian squatters who share their Brooklyn home with ex-cons, recovering crackheads and other mentally wobbly characters. The young punks who run the squat are surprisingly soulful, preaching a rebel brand of Christianity that aims to reclaim Jesus’ message from the Far Right.

“Homeless people are lazy? Christians don’t think that! Ronald Reagan thought that,” says a dreadlocked 20-something in one of the film’s more inspired moments. “Jesus wants us to fight for the homeless!”

Regardless of your political leanings, the message of “Our House” is an important one — even the most destitute among us can provide second chances to those who need them. In the course of the film, this non-judgmental compassion proves successful in turning lives around. At the very least, “Our House” points us in the right direction regarding that popular question, “What would Jesus do?”

Nearby Scott County, Ind., makes an appearance with “Hitting the Nuts,” a goofy comedy that, at its best, evokes Christopher Guest. The film depicts the hijinks surrounding a small town’s illegal poker tournament and its unlikely participants: undercover preachers, a Mennonite and the like. Like many of the features showing at Derby City, “Hitting the Nuts” has a charming DIY quality. But its large, apparently well-rehearsed ensemble transcends the picture’s homemade feel with polished comic timing.

Perhaps the strongest performance belongs to Stephanie Braith in “Meth,” a 24-minute short from Cincinnati filmmaker Michael Maney. Braith is convincing in her descent into methamphetamine addiction, despite a look — in the early going anyway — that would get her turned away from most cigarette counters. Braith also meets the challenge of having a mannequin for a co-star. “Meth” is stylish and sports impressive production value — as do all of the finalists in the short-film competition.

Derby City seems to have found a home at the Clifton Center, and will kick things off there on Friday evening with a collection of short films. (This is a free screening of works from Rommel’s Bob Rodgers Group.)

On his hopes and dreams for Derby City and the local scene in general, Rommel says that while the quality of locally made film is improving, he can’t say for certain where Louisville’s interest level is.

But one thing is clear:

“If you don’t support it, it will go away,” Rommel says. “It’s like the (Louisville) Orchestra. The orchestra went bankrupt. So, if you don’t want an orchestra, I guess don’t go. Hopefully that won’t happen with the film scene.”