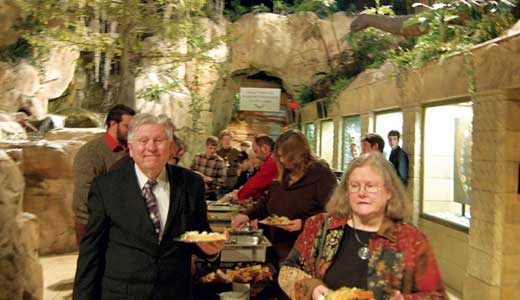 Two by two, couples filed into Petersburg, Ky.’s Creation Museum for “Date Night,” a Feb. 11 event billed as “a special evening (featuring) an inspiring message about love and the biblical view of marriage from Creation Museum founder Ken Ham,” according to the museum’s website.

What better place to spend a romantic Valentine’s weekend evening than the Creation Museum, a 70,000-square-foot “museum” that employs state-of-the-art video and animatronic technology in an effort to discredit the fields of evolutionary biology, geology, history and liberal social values while at the same time tweaking science to fit with a young Earth interpretation of the Book of Genesis?

Yet what was supposed to be a delicious buffet meal accompanied by the musical stylings of master guitarist Ray Cummins quickly turned into a lesson in intolerance when two members of our party were denied access to the museum under suspicion of being a homosexual couple, without granting us a refund.

Three of us (my girlfriend, Shanna, myself and our friend Brandon) arrived at 6 p.m. as Ham was just beginning his talk in the museum’s “special effects” room. After leaving our jackets at the coat check, we advanced to a security checkpoint where a pair of armed guards waited.

One guard asked us about our reservations. Shanna had originally purchased six tickets, but found it was impossible to give them away, thus our numbers had dwindled.

“There’s only three of you,” the guard noticed, pointing at Brandon. “Where’s this guy’s date?”

We explained that Brandon’s “date” was running late, failing to note that the date in question was Joe Sonka, a blogger for the Kentucky political blog Barefoot & Progressive. Both Brandon and Joe are heterosexual, but the solo Brandon nonetheless became the focus of much interest for the guards, who carried the air of actual police beyond their museum-specific uniforms.

“What kind of car will she be driving?” asked one of the guards.

“Oh,” I said. “Brandon’s partner’s name is Joe. I think he drives one of those hybrids.”

As soon as I uttered the word “partner,” the officer exchanged an uncomfortable glance with his pint-sized colleague, whose name badge read P. McDonald.

McDonald informed us that the security staff had had a meeting earlier in the day in which this very scenario was discussed. “You guys (Shanna and I) can go inside,” he told us, “but your friend and Joe cannot.”

When pressed on the issue, McDonald said an “un-Christian” couple like Sonka and Brandon would upset the evening for everyone, and, as proof, the museum’s website explicitly stated that such couples would not be allowed entry. (For the record, it does not.)

At the culmination of our exchange, I told McDonald that it wasn’t very Christian to exclude people, to which he rhetorically asked, “How exactly is it Christian to be gay?”

Some attempts at backtracking were made: I said there had been a misunderstanding; that Joe and Brandon’s girlfriends had cancelled and that, ha ha, neither was gay, but to no avail. Brandon and Sonka, a perceived gay couple, would not be allowed inside, no matter what.

Without our friends, Shanna and I pressed onward to the special effects room, my fists clenched with rage, where Ham regaled us and some 40-plus couples about biblical incest and how a man should love his wife for who she is because, in time, she’ll be as ugly as her mother.

The mood lightened somewhat at dinner, which was held in the museum’s brontosaurus-adorned thoroughfare and catered by Cincinnati-area Christian catering service Funky’s, thanks in part to the conversation we had with a conservative Christian couple whose decency and good humor contrasted sharply with the institution’s underlying prejudice.

A spokesman for the museum denies that any discrimination took place, attempting to blame Sonka.

“We knew that someone was coming to be flamboyant to essentially be disruptive,” Mark Looy, chief communications officer for the Creation Museum and its parent company, Answers in Genesis (AiG), tells LEO Weekly. “They were trying to stir things up, be disruptive,” he adds, claiming that Sonka wrote on his blog that he planned to crash the event.

The statement Looy refers to is in a Jan. 13 post from Barefoot & Progressive, wherein Sonka wrote, “Let’s get to work doing a fundraiser so we can send the most flamboyantly gay couple imaginable to this dinner.” No declarations of gay jihad there.

Looy also contends that people of all faiths and lifestyles, including atheists and gays, are welcome in the museum so long as they do not plan to disrupt others from enjoying themselves — not a word of which was relayed to us by McDonald, who seemed deeply concerned with the effect any gayness would have on the Date Night.

It should be noted that the following day, the museum admitted Ohioan Jeffrey Bornhoeft, who was found not guilty by reason of insanity in 2000 after murdering his ex-wife’s new husband. Looy says security measures were taken to accommodate Bornhoeft, who would have been allowed to attend the Date Night because he’s not homosexual.

“This simply elucidates the problem we are trying to eradicate,” says Fairness Campaign Director Chris Hartman. “I’m not shocked, because this is still perfectly legal in the state of Kentucky. A lot of people don’t realize that in this state, there’s a perfectly legal right (for a business) to deny someone employment, to deny someone a roof over their head, and to deny someone a visit to their favorite restaurant … if they think you’re lesbian, gay, bisexual or transgender.”

Hartman cites a recent poll conducted by the state’s Fairness Coalition that reveals 83 percent of Kentuckians favor a statewide fairness law, which would in effect legally prohibit the museum’s Date Night act of discrimination.

“Discrimination and discriminators are a dying breed,” Hartman continues. “Or, an evolving breed, shall we say, because what we learned in the poll is that one in four Kentuckians have someone in their family who is LGBT. Almost three in four Kentuckians have someone in their life — a friend, a co-worker, someone they see on a regular basis — who is LGBT. The more LGBT people in a person’s life, the less likely those people are to discriminate.”

Beshear did in fact reinstate an executive order (struck down by his Republican predecessor, Ernie Fletcher) prohibiting discrimination against state employees on the basis of gender and sexual orientation after his 2007 election. However, Beshear announced last December his full support of AiG’s intentions to build a $150 million creationist theme park — which plans to feature full-scale “replicas” of Noah’s Ark and the Tower of Babel and would depict dinosaurs and humans as living together — aided by $37.5 million in proposed state tourism tax breaks.

On this, the governor’s office did not provide comment.

The Better Business Bureau of Cincinnati has since been notified of the museum’s refusal to refund Shanna’s purchase of $143.80 of unused tickets.