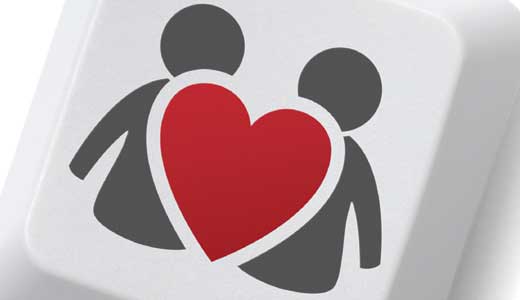 It’s almost Valentine’s Day again, and another year of being single is on the books.

Oh sure, I’ve dated in the past year. A little. But it seems to get more and more difficult to meet people as I get older; I’m not fond of meeting women in bars, I don’t go to church, and dating co-workers is frowned upon unless you’re a character in “The Office.”

As such, I found myself feeling particularly lonely one evening last spring, as well as a tad inebriated, navigating my computer to eHarmony.com, and improbably coughing up $60. I woke up the next morning, remembered what I’d done, groaned, and said, “Aaahh, crap.” My dog looked at me like I was insane.

I had always sworn off online dating, because, let’s face it, it’s easy enough to lie to someone in person. But on the Internet? I could tell you I’m a 24-year-old Olympic champion accordion player named Josie, and you wouldn’t know the difference. (I’m not, by the way.)

However, a 2009 study, as reported by Psychcentral.com, revealed the typical Internet dater is someone who is social and has high self-esteem, both attractive qualities; those who are reclusive or have low self-esteem are far less likely to put themselves “out there” via dating sites, lest a large audience see their negative self-image. Sounds logical, and even a bit hopeful.

But what I discovered on eHarmony (or, as I like to call it, eHarMONEY) was a lot of people who had different expectations than mine. I went out to dinner with one nice woman, and I thought we had a good time. I e-mailed her the next day, but she quickly stopped responding. Finally, I asked her what was up, and she wrote, “I figured if you were interested, you would have called me to talk on the phone.”

Another woman I met showed up acting and appearing quite stoned — it was a Sunday afternoon — but we had a nice chat (her eyes stayed open for most of it), and it was she who suggested we get together again. I e-mailed her a couple days later, and she said she would get with me early the next week to make plans. Haven’t heard from her since. It’s only been 10 months, so my fingers are still crossed.

On the other hand, I’ve met a few people who’ve become genuine friends, and for that I’m grateful. But I have to say, my recent experience with OKCupid.com has been even more entertaining than eHarMONEY. And, hey, at least it’s free.

OKCupid occasionally sends its members e-mails with “Quiver Matches” — i.e., people you’ve been specifically matched with based on compatibility. Then again, it could be random. Why do I say this? Because not once, but twice I have been matched up with men. Time to work on those proprietary filtering tools.

I’m also amused by people who will try diligently to engage me, even though we have almost no discernible compatibility. I like live music, reading, creative writing, dining out and sports. If your hobbies are slamming Jager shots in clubs, line dancing, hip-hop and the “Twilight” series, we may not need to be friends, ya know?

But the show-stopper hit me recently when I got a message from 36-year-old “lovely_eve.” Red-haired, suspiciously youthful-looking and cute, she sent me a “wink” e-mail with this message: “Hello, how are you? Check out my profile, I’d like to know you better!”

I admired her pictures for a moment (I love redheads), and then I noticed her location: Mykolayiv, Ukraine. The official distance: 5,412 miles. Hell, I balk when I’m matched with women from Elizabethtown.

At that point, I wanted to respond, “Hi there, lovely_eve. Should we make plans to meet for borsch and babka? Or should we move right into serious romance?”

Then I read her profile, which included this classic positioning statement: “I wish to feel this fire burning inside when I see my beloved someone or just hear his steps and voice. I miss this feeling very much, and I am full of hopes (sic)! Who knows, maybe my hopes and dreams came true and you could be the one to make my heart sing and jump with joy in the future?”

Happy Valentine’s Day, lovely_eve — you’ve found your man. She tells me all I have to do is send $3,600 so she can get her passport and a ticket on an airplane that will fly her directly into my arms. That’s a bargain price for eternal love, in my book.

Check’s in the mail, lovely_eve, and the pierogi are simmering on the stove, much like my love is simmering in your inbox. But, good god, I hope you don’t have hairy arms and a penis.

LEO is for lovers