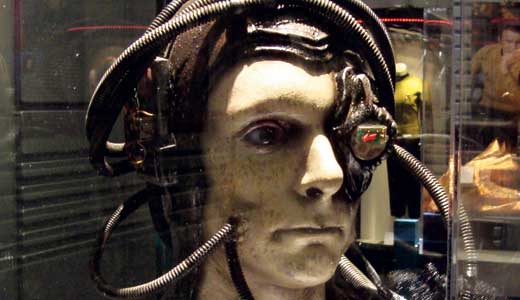 While I never evolved into a true “Trekkie,” my years of watching Capt. Kirk, Mr. Spock and the never-ending line of ill-fated Starfleet security personnel in the red shirts of death had an undeniable effect on my childhood and, ultimately, my adulthood. It changed the way I imagined the universe, permanently and positively.

And this is why I had such a keen interest in exploring “Star Trek: The Exhibition,” which opened Jan. 23 at the Louisville Science Center. For even a casual fan, it’s the final frontier. The exhibit focuses on the parallels between the science fiction presented in all iterations of the “Star Trek” canon and modern science, delving into themes of exploration, health innovation, communication and space travel.

But the fun part of this exhibit is getting up close and personal with costumes, weapons, technology and other props used in filming the series and films. Visitors get a look at Capt. Picard’s efficiency apartment, as well as a chance to walk right into the famous Transporter from the original series. (It’s a relatively flimsy construction of plywood and Plexiglas, but it’s still cool as shit.)

“We dismantled it so that no one can get lost,” Curley quipped. He also noted that the reason the Transporter was invented in the first place was the shoestring budget; rather than film landings and take-offs from different planets, it was easier to “beam” people to the planets using cheap effects.

Perhaps the show stopper in “Star Trek: The Exhibit” is the chance to sit in — wait for it — Capt. Kirk’s chair, with Shatner’s butt-prints still pressed into the leather.

As one would imagine, the meager budget of the original series is evident in other props — many of the weapons, for instance, were cast of foam rubber, and costumes were hand-hemmed, usually crooked and cheaply made (the Klingon belt buckle is literally made of bubble wrap). As Curley noted, because of the lack of video technology in the 1960s, a TV camera could not pick up on detail the way a human eye would, so on our sets at home, the stuff looked plausible.

As the series and movies advanced into the 1980s and beyond, the budgets got bigger and the props became far more detailed. There’s plenty of that to see as well; but what’s most fascinating is the realization that so much of the technology the series conceived of 45 years ago has actually come true. For instance:

• The Starfleet communicator? Think about it — it was the original flip-phone.

• Dr. Leonard McCoy’s medical tri-corder, the computer he used to diagnose illnesses, was a crude magnetic resonance imaging (MRI) device. “Star Trek: The Next Generation” introduced laser scalpels, which are widely used today in many forms of surgery.

• There’s also the “electronic clipboard” from the original series and later the personal access display device, or PADD, which prefigured today’s iPads. The series also used “isolinear optical chips” to store data — they were colored blocks of wood in the original series, but served the purpose of today’s external hard drive or jump drive.

Digging deeper, Curley noted the utopianism of the 1960s was reflected in the show’s purpose to explore new worlds rather than conquer them. “It’s not about dominating space, it’s about learning,” he said. Now there’s a concept that should have been more fully developed in real life, eh?

“It’s great to have this in a science museum,” Curley said. “If you look through the whole museum, you will see the parallels.”