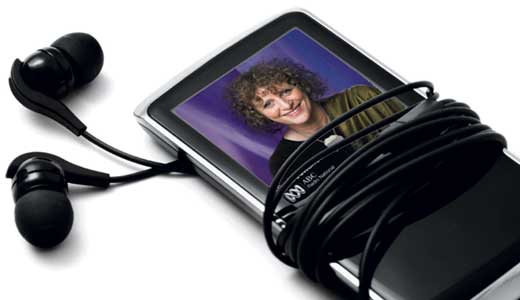 Even though blonde bombshell Mariella Frostrup is a Notting Hillionaire who counts Mick Jagger and George Clooney among her famous ex-conquests, she is no mere celebrity chaser. Well, she may be a bit of one, but it only comes in handy for scoring interviews with everyone from John Waters to Marilynne Robinson. She practically runs the Hay Literary Festival single-handedly, hosts book shows for both the BBC and Sky TV, writes regular columns for The Observer and Harper’s Bazaar, and is often asked to be a judge on panels for various literary prizes.

None of this stops her from having the sexiest voice in broadcasting. She was born in Norway to a Scottish mother, grew up in Ireland, but has spent the rest of her life in London, so her accent is a bit of a hodgepodge, but the voice itself is pure husky sexiness. Years of bedtime cigarette smoking no doubt underlie it.

Smoother than the timbre of her voice is the way Frostrup segues through interviews, allowing her to pack a huge amount of material into her weekly half-hour BBC Radio 4 show, “Open Book.” A recent episode had her tackling not only Alastair Campbell’s five favorite books but delving into the history of the Victorian novel with A.S. Byatt. In lesser hands, the show would undoubtedly have been a superficial skim-job, but Frostrup never fails to bring seriousness and depth to whatever subject she tackles.

As a podcast, “Open Book” is called “Books and Authors,” because one week of the month is given over to “Book Club with James Naughtie,” a half-hour segment in which the audience gets to ask questions of an author whose book they have all read in advance. Their questions are smart. They are not, “Where do you get your ideas?” or “How long did it take you to find a publisher?” Check it out at www.bbc.co.uk/podcasts/series/openbook.

The best thing about Koval is that her book show runs not weekly but daily. Where Mariella Frostrup is slick and sly, Ramona Koval is humble and genuinely curious. Her literary coverage tends to be more international. One day last week, a single segment of the show covered the brouhaha in India over the Jaipur Literary Festival being hosted by a white British male; the sanitization of the new version of “Huckleberry Finn” (you have got to hear the N-word pronounced in a deep Aussie twang); and the history of the Miles Franklin prize.

Koval herself is a writer of novels, journalism, documentaries and even a cookbook; thus, her knowledge and experience run the gamut. Yet she remains so unprepossessing. One regularly recurring feature is called “Off the Shelf,” in which she turns the microphone over to famous writers so they can present a mini-essay on their relationships with influential books. Some are fearsome, others frivolous. Last week, Ken Follett admitted that Ian Fleming had been his biggest influence, because it was from “Live and Let Die” that he learned how to kiss girls. Until I heard Follett telling his own tale, I had no idea he’d grown up in a strict Plymouth Brethren household in Wales. Koval knows precisely how to work this kind of stuff.

The only trouble with ABC Radio National is the seemingly random segments producers choose to podcast on a given day, so if you want to make sure you’re not missing something vital, go to: www.abc.net.au/rn/bookshow.