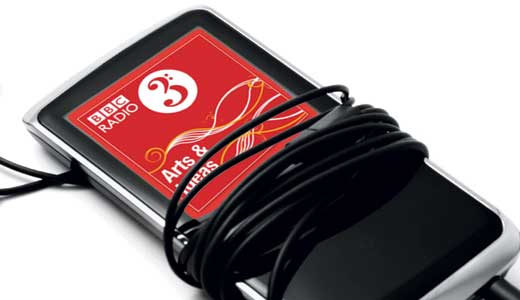 First of all, a shout-out to the many readers who have written in, phoned or stopped me in the street to enlighten me about podcasts I might be missing. It’s so swell to know you care! Seriously, it is.

The main thing I’m hearing is that I need to bring more “authentic” podcasts to the world, which is to say, ’casts not promulgated by funded radio stations — the kind coming from some guy’s basement or garage. People, I have to be honest. I’ve alluded to it a time or two previously, but this week I will spell it out: The majority of non-radio-associated (which basically means non-public-radio-associated) podcasts are like “Wayne’s World” without the irony.

So far, I’ve found a few that are OK, but even among the best of them (for example, “Wine for Normal People,” free at iTunes), there is far too much throat-clearing and self-congratulation in the opening minutes of the show, when all we really want is for the hosts to get down to business. Just as soon as an independent podcast satisfying these criteria shows up, I promise to report on it immediately.

Having just done some throat-clearing of my own, we now move back to the Brits, who hardly manage to say the word “hello” before launching into a heated debate over, say, Helen of Troy or the Industrial Revolution. Maybe it’s just because the kingdom is so damned old, or maybe it’s because they feel more palpably that the future is melting away like the Antarctic pack ice, but these blokes like to get right to the nub.

The scrappiest among them is Philip Dodd of BBC Radio 3’s “Night Waves,” which comes to you as the Arts & Ideas podcast. Dodd is my absolute uncontested favorite figure to hate. He never ceases to get my dander up, make me want to smack him, and at the same time hug him for being the only person in the public domain to ask such impertinent questions. And I don’t mean in a Fox News kind of way.

This man, if given the chance, would argue with Mohandas Gandhi. He would argue with Mother Teresa and Martin Luther King Jr. In fact, he would probably like nothing better than to have the three of them on a panel. OK, so that may make him sound like a teenage boy (specifically, my own son), but the wherewithal with which Dodd does it! The chutzpah! The derring-do! The brains!

“Night Waves” is a culture-discussion program on a station otherwise dedicated to classical music, and because of this (perhaps also because the live version runs late at night), Dodd and his colleagues pack more challenging conversation into their daily segment than most of the stations where you’d expect to hear such content do in a week. The podcast is a weekly one-hour culling of the highlights.

Normally, when I go about my daily business, listening to my favorite ’casts while driving, walking the dog, cooking, laundering, battling insomnia, etc., the given program just makes my chores go more quickly and pleasantly. Dodd’s show is the only one that consistently stops me in my tracks and makes me either nearly drop a plate or have to put the dog on a sit-stay while I rewind.

A classic example of a crockery-dropping moment came when he said to Ayaan Hirsi Ali, the Dutch writer and activist sainted by the West for her feisty critiques of Islam, “When you say ‘we,’ I don’t know who ‘we’ is.”

But it’s not just the extended interviews that go against the grain of the publicist-promotion treadmill. The panel discussions are like none other. If “Night Waves” reviews an Israeli film, you can bet there will be a group dissection, including a Syrian, an Indian, a Palestinian and possibly even a German — with Dodd and his posse cracking the whip over all of them.

It’s a quick-thinking venue, no throat-clearing allowed. It causes waves. Check it out at www.bbc.co.uk/programmes/b006tp43.