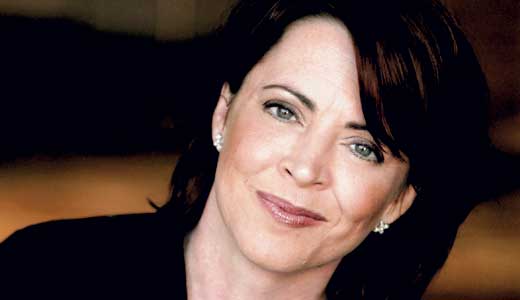 It’s gotta be a good feeling when Lewis Black calls you “the funniest woman in America.” Kathleen Madigan has been slinging jokes for more than two decades and was both a contestant and a judge on NBC’s “Last Comic Standing.” She’s appeared on every late-night talk show more times than it’s worth counting, and she recently released a DVD called “Gone Madigan.” Madigan performs Saturday at the Bomhard Theater.

LEO: Hi, how are you doing?
Kathleen Madigan: I’m good. I just got to Wilmington, Del.

LEO: Delaware just sounds like a depressing state.
KM: Yeah, I don’t really understand what’s going on here. I know Wilmington is the credit card capital of the world — but I don’t see anybody here. I guess no one’s running the credit cards … feel free to charge whatever you want.

LEO: And you’ve spent time in Louisville before, as well?
KM: Oh yeah, a bunch of times. Mostly when I first started out — the first five to 10 years, I would say. Kentucky and Tennessee are two of my favorite states — they’re beautiful. People from the North who have never been there make fun of the South no matter what. But it’s just pretty and laid back.

LEO: Does growing up in the Midwest force you to have a better sense of humor than growing up somewhere else?
KM: Yeah! Because if you grow up somewhere and it’s absolutely lovely … what’s funny about that? Nothin’. If you grew up in Santa Barbara, what’s there to complain about? What’s there to be cynical about? Nothing. But the Midwest … yeah, that’s why we all drink and smoke and eat bad food … we don’t care.

LEO: Your bio says you like to write in your pajamas and smoke. Is that really when you feel most creative?
KM: It really is my favorite thing to do. If I had to go into an office and get dressed up and not smoke, I would be a lot less productive.

LEO: I’ve talked to a lot of comedians who did “Last Comic Standing,” and everyone’s experience is different. What was your experience like?
KM: I didn’t like the whole idea of it, but I liked that it was on in prime time, and we got to reach an audience that wouldn’t normally watch Comedy Central or stay up for Letterman or Leno. So you’ve got new people finding out about you, but the way they produced it and the way it was run and stuff was probably not the best way you could go about that.

LEO: Is there a way to do it right in prime time?
KM: Oh, I definitely think you could … yeah. They just missed the mark with a lot of stuff, and as a result, the viewership trailed off year by year.

LEO: Do you write about the darker or brighter side of the human experience?
KM: I’d say it’s the darker side, but with a lighter attitude.

LEO: Why do people like to laugh at the darker side of things?
KM: Because they think they’re sad. So their reaction is to either be sadder or laugh at it. And most comics come from groups of people who have been persecuted for years — it’s the Jews, the Blacks, the Irish, the Mexicans. You don’t find a funny German, because they kicked everyone’s ass. Ya’ know what I mean? There’s very few funny Swedes, because everything’s fine — there’s nothing horrible happening.