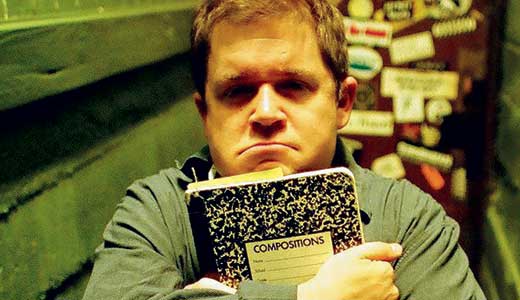 Patton Oswalt is probably best known as the voice of Remy the rat in “Ratatouille,” or perhaps for his role as Spence on “The King of Queens,” but he is beloved by nerds, geeks and fanboys the world over as a hilarious and nerd-friendly stand-up comedian.

But hey, an artist has to grow, right? So Oswalt has branched out into publishing. His first effort, “Zombie Spaceship Wasteland,” is a slim, insightful tome that is part memoir, part shtick — but all good.

Oswalt, like thousands upon thousands of restless youth before him, knew there was more to life than the confines of suburbia and yearned to escape, first utilizing comic books, “Dungeons & Dragons,” science-fiction and alternative rock before heading off to college and his eventual career in stand-up.

The writer’s insights into being a professional comedian are probably the book’s highlights. Quoth Oswalt on separating the wheat from the chaff in stand-up comedy: “It reminded me of how literati avoid genre fiction or film snobs sniff at big-budget Hollywood movies or exploitation trash. It was how a lot of musicians treated rap and hip-hop when they first appeared. But avoiding the trash makes you miss truly astonishing moments of truth, genius, and invention.”

All this culminates in a painfully hilarious essay detailing a series of headlining shows at a horrible suburban Vancouver comedy club owned by a vile, cocaine-snorting scumbag. Oswalt gets blown off the stage by another comedian who steals his material from Playboy magazine and narrowly avoids getting killed by — no shit — an escaped axe murderer. But hey, that’s showbiz.

The titular essay provides a thematic framework for the book, separating creative youth into three categories: Zombies, Spaceships or Wastelands. Each group simplifies, leaves or destroys the world — not literally, of course — and Oswalt offers up well-reasoned examples of all three. (Spoiler: Oswalt is a Wasteland.)

Oswalt’s attention to detail rewards the careful reader: Look for his note on the book’s typeface and his listing of non-existent previous works, which perfectly illustrate why, as mentioned above, most literati scoff at science-fiction: “Song of the Cyrus-5 Dream Hunters,” anyone?

A few sections fall flat: “We’re Playing Snow Fort” is poignant but overwhelmed by the cutesy-poo “I’ll write this in the voice of an 11-year-old” trope that Oswalt applies, while “The Song of Ulvaak” is a throwaway gag that runs on for too long. One other beef: The book is extremely brief; I managed to plow through it in about two hours, and I have to follow along with my finger on the page. A few more chapters would have been nice, but I guess it’s better not to overstay one’s welcome.

So, are you a zombie, a spaceship or a wasteland? Doesn’t matter; if you too want to be a robot that helps wolves have sex, this is the book for you.