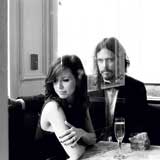 A female singer who plays piano. Her male counterpart on acoustic guitar. Such surface details aren’t the only resemblance between this duo and The Swell Season. Delicate melodies that effortlessly fall into close-harmony — it’s a card Joy Williams and John Paul White play well. But it’s a shame how monotony accumulates on their full-length debut. The voices are thin — seemingly intended to convey a lived-in vulnerability — but the arrangements lean toward pretty cooing. A mid-set title track threatens to shake things up with specific lyrics and an energetic, feedback-laden arrangement; imagine one of Jack White’s gothic efforts as produced by T. Bone Burnett. It clears the air so much that an instrumental follow-on is necessary to re-establish the disc’s initial gauzy mood. Unfortunately, that effort succeeds. If semi-sweet folk-pop is your cup of tea, go ahead and enjoy, but seek out a version of this disc with two bonus tracks that are slightly livelier than most of what’s here.