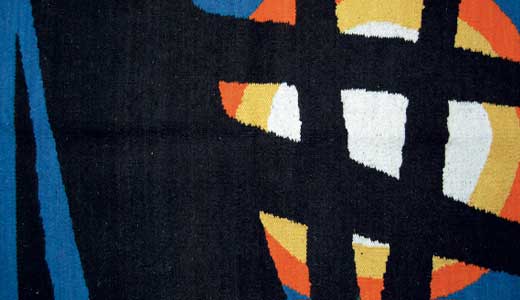 If age can be a state of mind, then artist William L. Fischer is younger than most of us. His biological age is 92, but his mind has been emitting bursts of creativity on a daily basis for decades.

Fischer doesn’t work in one medium or in a single style. He’s been an artist for so long (since he was 10) he’s had to change gears occasionally. He’s quick to say there is no typical Bill Fischer style. “It’s whatever I feel like doing,” he says. “I experiment constantly.” His creativity doesn’t seem to allow boundaries.

Fischer first dabbled in painting and then moved on to sculpture. He did representational art for years, then tried his hand at abstraction. Sometimes he takes a design from a painting and later repeats it in glass or incorporates it into a rug.

He’s also done landscapes, prints, watercolors, cityscapes and lacquers. Fischer even studied portrait painting but “didn’t enjoy it,” he says. I ask him if there is any media he wants to tackle but hasn’t. “Not really,” he answers. My quick survey of his decades of art (the interior of his 1852 house in Butchertown is covered with his artwork) reveals that ceramics may be the only thing he hasn’t tried.

Fischer once worked for The Courier-Journal in the editorial art department, leaving to start his own Army surplus business. He ran a men’s shoe store for 40 years at Third and Jefferson. Although he didn’t make his living off art, it was always present, giving him the luxury of not having to worry if he sold anything or not.

He’s got some great “fame, once-removed” stories. He worked with the muralist David Alfaro Siqueiros when he was in San Miguel de Allende, Mexico, around 1945. Siqueiros taught Fischer how to work with lacquers.

Jackson Pollock, the famous Abstract Expressionist painter, had his paints mixed at Devoe Reynolds in Louisville. After Pollock’s death in 1956, the manufacturer still had Pollack’s latest order ready to be shipped. They called Fischer to see if he wanted the 35 gallons of paint — many of his works from that time period were painted with Pollock’s paint.

Fischer’s creative passion has resulted in scholarships that bear his name. He created the Artist Bill Fischer Foundation for Working Artists in 2001 at the Community Foundation of Louisville. Anne Monell, vice president of communications and marketing at CFL, explains that the problem of defining who is a “working artist” was addressed “when Bill Fischer set up the fund. He just wanted someone who is actually doing work — for anyone who considers themselves a working artist. It can be any age from junior high school to adult. The preference is for artists who use modern media.”

Fischer has an exhibition at Galerie Hertz, 1253 S. Preston St., through Feb. 19. “Full Circle” is a mini-retrospective that includes paintings from 2010, rugs from the 1970s, and watercolors from 1960s. His Abstract Expressionist paintings are based on circles, which seem to be an excellent metaphor for an artistic life well lived.