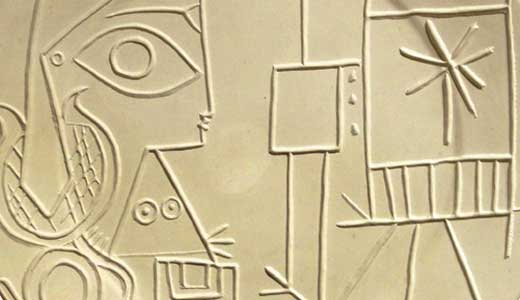 Did you know that owning three of the same thing qualifies as a collection? Knowledge like that makes the dust-bunnies in my house look more appealing.

Part of the job description of a museum is to collect. The Kentucky Museum of Art and Craft (KMAC) decided to illustrate that concept with two exhibitions, “Collecting Kentucky” and “Artists Collect.”

Founded in 1981, “Collecting Kentucky” describes what KMAC does.

“Museums are the keepers of the natural and cultural heritage of America and its people,” says chief curator Brion Clinkingbeard. “We reflect the rich diversity that makes our nation so vibrant, and the KMAC permanent collection is in a small way a reflection of the visual arts heritage of Kentucky.”

Marvin Finn was a star in Kentucky’s folk art tradition. His work is easily recognizable: brightly colored animals, usually birds, cut out of thin pieces of wood, such as “Large Blue Rooster with Wings.” Their energy is another factor. Rarely are they passive — birds are on the move, wings outspread, beaks open. But even if they’re standing still, they’re painted in vibrant stripes and dots.

Textile artist Alma Lesch is well represented by “Miss Anne,” a quilted, appliquéd and pieced object that tells a story, whether truth or fiction, of a long-ago life. Its juxtaposition with Ron Isaac’s trompe l’oeil “Farm Dress” enriches both.

In a small section of wood bowls stands the lathe-turned “Macassar Ebony Vessel” by Berea’s Rude Osolnik. This work by the “grandfather of contemporary woodturning,” with its small lip and black swirling lines, illustrates why Osolnik earned that title.

Jack Fifield and Max Krimmel are worthy of their placement beside Osolnik. Fifield’s “Natural Edge Footed Vessel” soars like the wingspan of a large bird, while Krimmel’s “Bowl #387” is made of alabaster so shiny it looks like glass.

Artists realize that after creating comes collecting (or maybe it’s the other way around). Our local artists have great stuff, including the Picasso plate owned by ceramicist Sarah Frederick. She bought “Jacqueline au Chevalet” in 1969. “Like the very surprised people on ‘Antiques Roadshow,’ my jaw dropped a mile when I learned what one like it had sold for recently at Christie’s (auction house),” Frederick says.

Three pieces owned by glassblower Brook White are shown, including “Guardiano Del Moro” by Monica Guggisberg and Philip Baldwin. This long, swirling vessel of dull orangewith an overlay of blue is a great example of their work. Found-object artist Caroline Waite has to collect in order to create. Her “Self Portrait of the Artist as a Collector” includes such items as keys, lighters and jewelry. “I hope to highlight things which are often inherently humble … but have had a past life and use somewhere else,” she says. “I don’t analyze too deeply what the initial attraction is to this strange mix of collected objects.”

A panel discussion, “30 Years of Collecting Kentucky,” will be held at 6 p.m. on Thursday, March 3. Collectors/panel members are the Rev. Alfred Shands III, Lois Mateus and John Mahoney, with artist/moderator Arturo Alonzo Sandoval. Free for members, $5 for non-members.