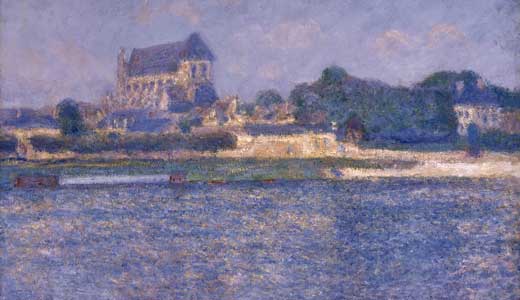 "Vernon in the Sun" by Claude Monet

“Landscape is nothing but an impression,” said Claude Monet, “and an instantaneous one …”

Those were fighting words. Today we have a tendency to forget just how revolutionary the Impressionists were in late-19th century France, preferring to get lost in the pretty colors and serene terrain. Painting would never be the same again.

Viewers to “Impressionist Landscapes” have the opportunity to see this transformation in the 73 paintings in the exhibition. Arranged in an art historical timeline, Impressionism is bookended by Barbizon School’s Realism on one end with Post-Impressionism and Fauvism at the other.

Impressionism started in Paris, then the art capital of the world, and gradually made its way to America. Plein air (outdoor) painting let the artists see firsthand what ever-changing light did to the landscape. Characterized by short, loose brushwork, the resulting paintings had a sketchy, lacking-in-detail quality.

The Brooklyn Museum was one of the first museums in the United States to take notice of what Impressionism was doing to the time-honored landscape painting. Their 39 paintings form the core of the exhibition.

“We are tremendously excited to have on loan these wonderful paintings from Brooklyn’s distinguished collection,” says Ruth Cloudman, chief curator at the Speed, “and to be able to show them side-by-side with Impressionist and Impressionist-inspired paintings from the Speed’s own collection and from other institutional and private collections in Kentucky. Since these works will never again be shown together, this is literally a once-in-a-lifetime opportunity to see an extraordinary range of Impressionist paintings.”

Monet is the best-known French Impressionist, and he’s worthy of the star billing. The ability to add to the Brooklyn show (a rare treat since most traveling exhibitions are self-contained) has resulted in a coupling available just for Louisville viewers.

Just as impressive are Monet’s later works, the abstract “The Islets at Port-Villez,” and “Vernon in the Sun” with its visible texture. Understanding Monet is a shortcut to understanding Impressionism.

American Impressionists are well represented, especially John Singer Sargent and Frederick Childe Hassam. Hassam’s exquisite “Poppies on the Isles of Shoals” is reproduced on the stairway as a directional sign of what is to come. Sargent’s “Val d’Aosta” is an interlude from the portraiture for which he is best known. Landscapes became the subject he did for escapism and personal enjoyment.

Cloudman also added some Kentucky Impressionists into the mix — Paul Sawyer from Frankfort and Hartford’s Charles Courtney Curran, an exceptional artist. Although little of his “On the Heights” has the typical characteristics of an Impressionist painting, it’s worthy of multiple viewings for his skill with shadows and details.

The Speed has put together many programs related to the exhibition, such as “Lunch with the Impressionists” and “Inspirationism: Creative Responses to Art” workshops. See the website for a complete list.

Stephen Shore’s “The Gardens of Giverny: A View of Monet’s World” gives viewers the opportunity to walk among the gardens of Giverny, Monet’s home of 43 years, located near Paris.

Monet moved to Giverny in 1883, then went about transforming it into the inspiration he sought. It was a place more lush that reality, and a powerful influence on Monet’s beloved water lilies series. It is inspiration visualized.

“Monet (sought) nature, then he created nature,” says Suzanne Weaver, Speed’s curator of contemporary art. “He became fascinated with it. He built the Japanese bridge, built the trellis, then let it go wild, covered with wisteria, (all) based on Japanese prints. That’s reversed; he brought nature to his world.”

The Metropolitan Museum of Art in New York City commissioned Shore to photograph Giverny from 1977-82. That must have been a dream assignment. In his images, you find the flowers, plants and bodies of water that inspired Monet.

As Monet was fascinated by light, so was photographer Shore. He did as Monet did, photographing Giverny at various times of day, in different months and in all types of weather. Shore did not duplicate Monet’s famous paintings — why bother? — but strove to give the viewer a sense of the place that inspired those paintings.

The resulting images cast a spell, surely as Giverny did on Monet and Shore, and are worthy additions to the landscape paintings in the next rooms.

The Speed Art Museum’s new admission policy was unveiled alongside the opening of the special exhibitions “Impressionist Landscapes: Monet to Sargent” and “The Gardens of Giverny: A View of Monet’s World.” There is now a general admission charge to replace the suggested donation of $4. To ease the public into the new policy, there is a special combined admission fee to view the permanent collection, Art Sparks Interactive Family Gallery and the two special exhibitions ($5 members, $10 non-members).

The new standard general admission fee is waived for Speed members and children under 3 years old. Non-member adults will be charged $10. The new cost for children ages 3-17 is $5, with seniors 65 and over at $8. Future special exhibitions may have an additional fee.

Because of arrangements with U of L and Bellarmine, their students and faculty are not charged a fee for viewing the permanent collection and Art Sparks.

The First Friday Trolley Hop now has a new site on its route with the onset of this policy. The Speed will have free general admission from 5-9 p.m. on the first Friday on each month; the charge for special exhibitions still applies. —JAT