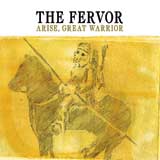 On The Fervor’s latest, Arise, Great Warrior, the drama is more subdued than the title might suggest. From the opening track’s first couple of somber minutes to the point where it eventually kicks into overdrive, dynamics are vast but contained. Husband-and-wife duo Natalie and Ben Felker remains at the forefront, with the former’s laconic vocals and keyboard setting the mood while the latter’s guitars and harmonies dictate the hues. Subtle shifts and pivots keep the record engaging. That the band has taken such special care in its sleights of hand might preordain this record to be a grower. Hooks like the one in “Crazy for the Feeling” aren’t the sort that kick you out of your seat but burrow into your brain over time. And then there’s the closing track, “Let’s Get Loaded,” in which the subject matter dictates the tempo shifts à la the Velvet Underground’s “Heroin.” That’s the kind of stuff that’ll warrant those multiple listens.