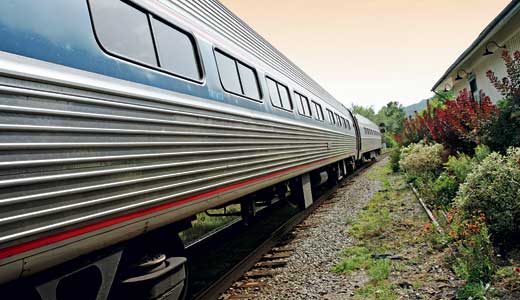 An epidemiologist with the Kentucky Cabinet for Health and Family Services, Gatewood, 26, must drive 100 miles roundtrip between her home in Louisville and job in Frankfort, five days a week, making a workhorse out of her Honda Civic.

“I spend probably $130 a month on gas just to get to work and back,” she says. “The commute is the only bad part about my job, but there’s no other way for me to get to work. A rail line, an efficient bus system, anything, really, would be better.”

As it happens, the prospect of a recently proposed intra-Kentucky rail line connecting Louisville, Frankfort, Lexington and eight other cities would be a boon for potentially hundreds of commuters like Gatewood, who believes alternatives to gas-guzzling automobiles would be better for the environment, as well.

“My commute is a huge drain on natural resources,” Gatewood adds. “Anything’s greener than driving a car.”

According to a Jan. 13 story published in the Frankfort State Journal, the Kentucky Capital Development Corp. has put forth a project dubbed “The Thoroughbred Rail Link,” a $75 million plan that would use existing rail infrastructure to operate two diesel-powered, Wi-Fi-enabled trains — The Secretariat and Northern Dancer — with operating speeds of up to 90 miles per hour.

“People could sit on the train, use their laptop, drink some coffee or read the paper all in the time they would normally be driving,” Kentucky Capital Development Corp. President Ron Tharp told the State Journal last month, adding that the average commute time would be comparable to existing drive times and that upward of 150 people could comfortably board each train car, with the possibility of adding more cars per train should the line prove popular.

The plan would utilize existing rail infrastructure owned by private companies CSX and R.J. Corman, and could feature stops at Lexington’s Keeneland racetrack and Rupp Arena, as well as Louisville’s Mall St. Matthews. The project could qualify for a portion of the $8 billion in high-speed rail funding outlined by the Obama administration.

“There are several benefits to a system like this,” says Ron Schneider, president of the Coalition for the Advancement of Regional Transportation (aka CART). “It would help relieve some of the traffic congestion on the highways. It would permit people to travel back and forth from these towns who may not be able to drive. It would be a big help, especially since we don’t even have Greyhound services anymore running to Frankfort. And, you know, driving is a discriminatory form of transportation. It discriminates against people who have blindness, epilepsy and those who don’t make a lot of money, as well, because some people cannot afford a car or the price of gasoline but could afford a train ticket.”

The consequences of eschewing rail can be detrimental to a state’s economy, Schneider warns. Last December, Wisconsin’s union-busting, Tea Party Gov. Scott Walker rejected $810 million in federal stimulus funds that would’ve created a similar rail line connecting Madison, Milwaukee and other cities — and with union protests rocking the state’s capital, it appears rejecting the job-creating funds might not have been wise.

The mayors of Kentucky’s largest cities — Democrats Greg Fischer of Louisville and Jim Gray of Lexington — have vocalized a need for both communities to work together to bring about what they have referred to as a “regional economy” to shore up job creation, not unlike those that have sprung up in North Carolina. As such, the prospect of a rail line could factor heavily in the growth of not only those economies, but, as Schneider notes, it could bolster economies in each town serviced by the line.

To this end, Fischer is supportive of any project, including a rail line that could bring about a so-called “super region” in the commonwealth.

“My administration is all about pursuing big ideas that can help move the city forward,” Fischer tells LEO Weekly. “We are open to looking into ways to improve the corridor between Lexington and Louisville, as well as develop the regional economy.”

However, Fischer’s calls for developing the land between the cities — thus advocating a kind of massive sprawl — doesn’t fit with the growth patterns that follow mass transit, which Schneider says are typically more dense and, therefore,
more walkable.

Kentucky Rep. Tanya Pullin, D-98, has long advocated in the state legislature that the Kentucky Department of Transportation focuses far too much on asphalt.

“I think that even for some of the more rural areas of Kentucky, that even as the demographic trends change and shift, that people may still want to live in their hometowns of Kentucky,” says Pullin, who has filed legislation that would create a rail advisory board comprised of experts in the field who would work with the transportation cabinet to steer funding toward rail-based projects.

But that hasn’t been easy.

“I’ve said this in transportation committee meetings more than once: You’re not the highway cabinet, you’re the transportation cabinet,” Pullin says. “That means funding more than just roads, which is what we already do. That puts a huge emphasis on automobiles as the primary means of transportation for people in this state, which a lot of them — particularly in the eastern parts of Kentucky — simply cannot afford.”

Kentucky Transportation Cabinet spokesman Chuck Wolfe says the cabinet doesn’t involve itself in rail because the lines are privately owned.

“The cabinets interaction with rail companies is somewhat limited,” Wolfe says. “We don’t maintain tracks, we don’t maintain the crossings, for that matter. Those are private property and the responsibility of those companies. In the transportation budget, there’s a small amount set aside for rail line assistance — $2 million — that companies can apply for.”

As a result, there’s little public subsidy of rail lines compared with highways, which makes the prospect of federal subsidy all the more lucrative. Tharp has reportedly said he would seek federal funding, ostensibly TIGER grants, to fund the project, and that construction could be completed by October 2012 — just three months after the projected groundbreaking of the massive Ohio River Bridges Project, which has just been delayed (again) by a federally mandated review.