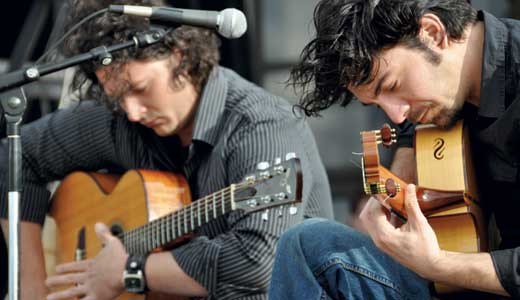 The art of Andreas Kapsalis and Goran Ivanovic (www.akgiduo.com) couldn’t be more different, but they share a mutual destiny through guitar. Kapsalis, the Chicago-born son of a classical violinist, is a self-taught steel string player known for his instrumental acoustic guitar work with Andreas Kapsalis Trio. Ivanovic, who plays nylon strings, studied formally in government music schools in his native Croatia. In past interviews, the two have attributed their chemistry and style to Alfred Hitchcock films. They arrive Thursday at The Rudyard Kipling (422 W. Oak St., 636-1311). The all-ages show begins at 7:30 p.m., cost is $7. Craig Wagner opens.

Beginning Thursday, Simon Banks, aka DJ Goast, will host a weekly electronic music and hip-hop night at Monkey Wrench (1025 Barret Ave., 582-2433). From 10-11 p.m., he opens the floor to an open-mic battle and freestyle event for any willing emcees. At 11, Goast and other local DJs will spin grime, dubstep and other sounds.

The post-punk group led by singer-guitarist Chris Higdon plays Zanzabar (2100 S. Preston St., 635-ZBAR) on Friday for the band’s first hometown show since returning from its month-long European tour in support of There Will Be No Miracles Here. Black God and Straight A’s open. Showtime is 9 p.m., cost is $5. More at www.myspace.com/frontiersband.