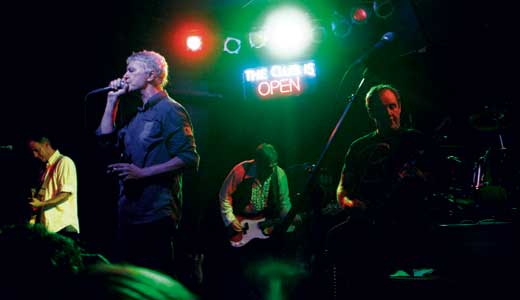 As reunions go, the Guided by Voices’ 1990s lineup sounded sloppy in the beginning, then quickly transformed into the force of magical shambolism fans have come to expect and, it turns out, even cry over. Principal songwriter Robert Pollard talks about that, current likes, and personal goals for the new decade. Now on a brief U.S. tour, Guided by Voices arrives Saturday at Headliners Music Hall, performing material off of its 1992-1996 output — Propeller, Alien Lanes, Under the Bushes Under the Stars and Bee Thousand, which Amazon ranks as one of the best indie-rock albums of all time. Columbus lo-fi fanatics Times New Viking open.

LEO: Any resolutions?
Robert Pollard: Not smoke and drink as much, especially smoke. Keep myself in better shape. The usual fare. More exercise. Try to learn how to meditate.

LEO: How would you best describe the rehearsals leading up to this tour?
RP: At first sloppy, but very rapid improvement. Fun. A party. Lots of people there. Some people cried at times.

LEO: What keeps you so prolific, and how do you decide what to leave out?
RP: I’ve gotten to the point where I know what I like and am pretty comfortable with the process of getting there, so there isn’t much of an editing process. It’s all fairly spontaneous, and most of what I throw to tape is workable. Also, I’ve got several different avenues or vehicles for my songs, so that in itself allows me to put out a lot of music.

LEO: Who is recording the shows this time out?
RP: Matt Stecker (Mediadrome/Livewire Digital) for my online one-stop shop (www.gbvdigital.com) — he’s getting pretty much everything and making it available.

LEO: Pretend you have your own television channel. Which three shows, past or present, do you show most often?
RP: “The Sopranos,” “Eastbound & Down” and “Curb Your Enthusiasm,” all current. Maybe “Twin Peaks” also.

LEO: Favorite burrito?
RP: Not a big burrito guy. I’m a little burrito guy. Prefer beef and like it at Taco Tontos in Kent, Ohio.

LEO: Currently reading?
RP: “In the Light of the Truth: The Grail Message” by Abd-Ru-Shin, and Scott Walker’s “A Deep Shade of Blue” (second time, even though it’s not so well written).