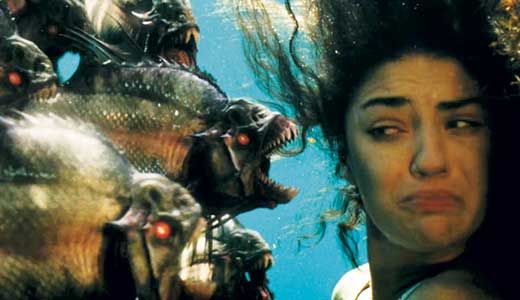 Stupid and obvious giant-CGI-maneating-fish-attack-bikini-clad-swimmers-in-3-D actioner that has absolutely nothing to do with Joe Dante’s excellent 1978 no-budget original bit o’ piscine poo. The mechanical effects by WonderFest frequenter Greg Nicotero are excellent, and there’s enough bare or nearly there titties to keep us awake, but SyFy has already filled our quota of CGI fish attacks through 2099. Silly-assed fun with Elisabeth Shue, Jerry O’Connell, Ving Rhames, Eli Roth, Richard Dreyfuss, Christopher Lloyd, etc. We still like the original better.

Jesse Eisenberg perfectly captures the too-smart-for-his-own-good mannerisms of super-nerd Mark Zuckerberg, founder of Facebook. That’s why it’s hard to understand why filmmakers Aaron Sorkin and David Fincher turn the movie’s last reel away from him to focus on the legalese. But that’s a minor quibble: “TSN” is one of the best films in recent years, one that actually lived up to expectations. Will be remembered as the movie where Justin Timberlake dropped his boy-band pout to prove he could really act. Highly recommended.

“The Hoff” — whose first big-screen appearance was in the cult classic “Star Crash” opposite Caroline Munro and Marjoe Gortner — truly loves to wallow in his own cheeze. Here he’s exactly where he wants to be: front and center while Seth MacFarlane, Pam Anderson, Gilbert Gottfried, George Hamilton, Hulk Hogan and a host of others toss abuse his way. What more could a man want out of life?

If you only see one subtitled French rom-com starring the two most beautiful people you are ever likely to see this month, make it this one. Romain Duris (“The Beat That My Heart Skipped”) is a successful “romantic for hire,” paid to break up couples who are not right for each other. His perfect world is shattered when he’s hired to distract the breathtaking Vanessa Paradis (“Girl on the Bridge” and real-life plaything of lucky bastard Johnny Depp), only to fall in love with her. A silly bit of French dip, but fun.

This is one of the more experimental films of recent years, as the filmmakers attempt to record not just Allen Ginsberg’s famously “obscene” poem and the trial that followed its publication, but the social upheaval of the late ’50s and a mini-biography of Ginsberg. James Franco, as Ginsberg, is excellent throughout, but the best part of the film is his reading of the poem over its animated interpretation. Confused? OK, you write a damn review and see how far you get! Recommended.

While it has nothing whatsoever to do with 2010’s “Legion,” this bit of low-rent indie demon-busting is quite nicely bad in its own right. David Heavener and Rowdy Roddy Piper star in this tale of an ex-priest writing a book about demonic possession who rescues the newly possessed Ariel Teal Toombs and discovers that he’s met her demon before.

A comprehensive 10-pack of America’s greatest adventure. Includes both the “50 Years of Space Exploration” five-pack and the “History of the Space Shuttle” five-pack at an exceptional price. The first starts with the Friendship 7 mission, which saw John Glenn become the first American to orbit the planet, after being lifted into orbit by an Atlas 109-D booster — little more than a long explosion that left Glenn no way out of the capsule if the rocket malfunctioned. Part one continues through the Apollo missions. The second follows the space shuttle program from its inception. Note that within days of reading this, the only evidence of either of these soul-enriching events will be these videos — America has abandoned both its Man in Space and shuttle programs for political expediency.

“Buffy”/“Angel” alum, 2004 Playboy spread-er and “The Expendables” eye-candy Charisma Carpenter stars in this chick-thriller about a horror writer who goes nuts and starts having visions of a brutal ax-massacre from decades ago. Kinda tame, as are most of these fem-spookers, but we’ve seen worse. And, at 40, Carpenter still looks damn good. Worth a peek.

SHAKE HANDS WITH THE DEVIL

Roy Dupuis and Deborah Kara Unger star in this true tale of U.N. Peacekeepers charged with protecting the populace of Rwanda from government-sanctioned genocide. One of the most disturbing films in recent memory; a powerful and riveting drama.

Dax Shepard and gorgeous Katie Aselton (who also directs) star as a naughty married couple who decide to take one night off from their marriage to taste the wild life they miss. Uneven and a bit obvious, but good, adult fun.

Billy Zane — whose career never recovered from playing the snooty rich guy in “Titanic” — tries once again, this time as an Army officer who wants to smuggle a fortune in stolen gems out of Germany and into the United States in 1945. Very loosely based on a true story, it comes down to a stand-off between him, his potentially double-dealing lover (Lyne Renee) and a murderous New York mob boss who is supposed to be fencing the jewels.