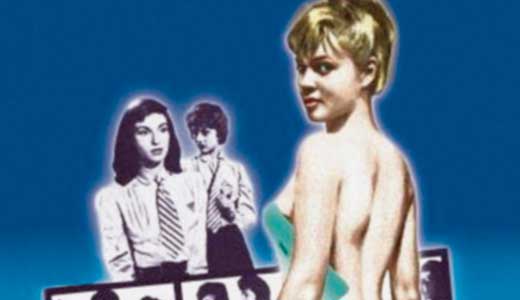 During the ’50s and ’60s, American films that contained even a flash of nudity were considered “porn,” and neighborhood theaters refused to show them. The exceptions were “art films,” suggestively titled Euro imports that played at upscale “arthouse” theaters. This set contains four perfect examples, two of them starring a young Elke Sommer: 1961’s “Daniella by Night” (“De quoi tu te mêles Daniela!”) and 1962’s “Sweet Ecstasy” (“Douce violence”). Both suffer from too much plot, too little nudity and way too much jazz. “The Nude Set” (1957, “Mademoiselle Strip-tease”) is a bit less sleazy; a nice how-to guide for those who don’t know how to take their clothes off. Really! But the best of the bunch is “The Twilight Girls” (1957, “Les collégiennes”) with nubile Agnes Laurent, a very young Catherine Deneuve, and several other soon-to-be “Sex Kittens” in a tale of French school-girl lust and shower scenes. Enjoy.

What we look for in sci-fi movies: thought-provoking concepts, terrific special effects, heady action sequences and tits — lots of great tits. And that’s just what you’ll find in this nicely priced four-pack that collects the entire “Species” franchise, beginning with Natasha Henstridge as the evolving alien sex-machine in 1995’s “Species” and 2004’s “Species 2.” She then handed the jiggly mantle to breathtaking Sunny Mabrey for “3.” Most recently, skinny Helena Mattsson, from “Iron Man 2,” has given us all a good look at what God gave her in “IV: The Awakening.” The set contains all four films on four discs.

This excellent series holds up well, despite the 15-year wait for it to appear on DVD. The action begins with the “Roswell crash,” then pulls back to reveal a global conspiracy to hide our destined enslavement to “The Hive.” An “X-Files” competitor, it had a good cast (Eric Close, J.T. Walsh, Megan Ward, Jeri Ryan) under the direction of Tobe Hooper, with good writing and a well-chosen time slot, but the studio let us all down by killing the series off at the end of its first season. Contains all 19 episodes on six discs, plus the never-before-seen season two pitch and other bonus goodies.

We first heard of Steven D. Levitt and Stephen J. Dubner’s book, “Freakonomics,” on “The Colbert Report,” where it was explained — in hilarious terms — that we humans are basically very clever morons who would cut out our beating hearts for a dollar. This doc takes it to the next level, examining human behavior in creative new ways that reveal just how badly we manipulate each other — and ourselves! Trust us, even if you never watch documentaries, you will love this film. Recommended.

The latest Philip Seymour Hoffman indie-arter, about a limo driver on a blind date who sets off a conflict between a pair of couples in NYC. Costars John Ortiz, Daphne Rubin-Vega and Amy Ryan.

Timothy Olyphant leads in this modern-day Western cable series, based on the works of Elmore Leonard. A former lawman in Harlan County, Ky., Olyphant is booted out of his job due to excessive use of force, then becomes something of a freelancer, taking down escapees, con men and corrupt sheriffs with the same determination. Extremely good, even if the Kentucky stereotypes are a bit thick.

MARC CHAGALL: PROFILE OF THE ARTIST

Any fan of the visual arts can tell you about Marc Chagall, a painter whose unique, almost childlike style won him generations of fans, the praise of thousands of fellow artists and infuriated rants from art critics. This doc, compiled from footage shot shortly before his death in 1985, follows a young English painter who goes to meet the master after discovering, quite unexpectedly, that he has rented Chagall’s old Paris studio.

This Jeff Daniels vehicle finds him toiling as an unpublished novelist kept hidden by his successful wife, played by Lisa Kudrow. Daniels hires Emma Stone as a babysitter, who then uncovers Captain Excellent (Ryan Reynolds), the caped superhero and imaginary friend that Daniels’ wife wants kept hidden at all costs. A truly wonderful and wacky little movie with lots of heart. Recommended.

Robert De Niro, Edward Norton and Milla Jovovich. What more could you possibly want to know? Norton is an arsonist behind bars, needing only a good word from a parole officer (De Niro) to get free. So he sends his dutiful wife (Jovovich) to seduce De Niro. Seen that before? Not like this, as Norton starts to have pangs of guilt for the first time in his life. Quite good; this deserved more theater time. Recommended.

This high-octane crime thriller has all the right action stars — Matt Dillon, Paul Walker, Idris Elba, Chris Brown, Hayden Christensen — and a slick look befitting its complex plot. In fact, there are three interacting plotlines as the bad guys prepare for a once-in-a-lifetime heist worth millions. The cops believe they’re closing in on the gang, but a former member, feeling betrayed, works both sides against the middle for his own purposes. Not the greatest crime-actioner ever made, but fun.

To be perfectly honest, we hated this ersatz “how to lose your virginity on YouTube” flick. A supposed comedy aimed at the Facebook generation, four guys make a crude pact, but the made-up-as-we-go feel, which should help sell it as a “real experience,” left us cold. If we want to see unscripted BS and abject meanness, we can find it in The C-J. That being said, a lot of people thought this was the next “American Pie.” If you’re one of those people, enjoy.