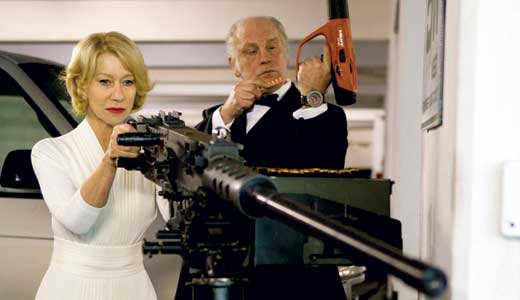 The perfect cross-generational popcorn actioner, with oldsters Bruce Willis, Morgan Freeman, John Malkovich and Helen Mirren, teapot in hand, playing retired government agents who find their lives comically threatened by upstart former underlings. It’s all done for fun with loads of firepower, goofy stunts and tongues planted firmly in cheek. Simply the most fun we had at the theater in 2010.

Diane Lane and John Malkovich lead a great cast in this true-life tale of one of the world’s greatest horses and the people around him. To be honest, we thought it was all kinda hokey: a case of “movie reality” over “real” reality, but then most of the world’s best-loved movies are guilty of that, too. Lane’s hair never moves, and her wardrobe is never splattered with dung as she mucks out the stables. Malkovich’s mannerisms and dialogue are just corny. But it all adds up to an old-fashioned, feel-good flick of a type they just don’t make anymore. Big Red fun.

Ari Gold stars in and directs this over-the-top tale of a nobody who dreams of becoming the world’s greatest “air drummer.” A major hit at the Sundance Festival, it co-stars Michael McKean and Jane Lynch.

Oh, wow! Considered by many to rival “Plan Nine” as the worst movie in history, this mind-bending piece of poo from legendary hack-director Al Adamson is now available on Blu-ray. It seems that a carny magician — who possesses psychic powers — teams up with an über-intelligent chimp to become the stars of the circus. But this pisses off the lion-tamer, who sells the chimp to a lab to break up the act. We could write volumes on just how cheezy, sleazy and unpleasant this flick is, but you really have to see it for yourself. A party in a platter, enjoy.

A terrific doc on an amazing character. Spitzer was the hyper-aggressive New York attorney general who shut down white-collar criminals, sending many incredibly wealthy socialites to prison and reigning in Wall Street at the turn of the 21st century. He eventually became governor of New York, championing gay marriage, rights for immigrants and other controversial causes. Uh, he also had a fondness for $1,000-an-hour hookers, which is why he stepped down in 2008. Frankly, we wish we had more leaders like him.

A wistful and loving look at the time John Lennon and family spent in New York City before his murder. Enjoying the anonymity that comes from living in a crowd of 7 million during the 1970s, he wandered the streets, free from harassment, just like any other resident — something he was never able to do in England. Lots of candid footage, both in and out of the studio, make this a treasure trove for any fan.

A wonderful bio-drama on the early life of John Lennon, starring Aaron Johnson as the 15-year-old tough being raised by his proper English aunt (Kristin Scott Thomas) while Mom (Anne-Marie Duff) lives a vagabond, unfettered life. Make no mistake: John Lennon was destined to spend his life in and out of prison had he not discovered music and a friend (Paul McCartney, played by Thomas Brodie Sangster) to help him focus. Not to be missed.

PIE IN THE SKY: SERIES FOUR

We don’t usually promote a TV series in mid-stream, but we just discovered this Limey gem. Richard Griffiths, from “Harry Potter,” stars as Harry Crabbe, the owner of a small restaurant where he spends every waking minute devising wonderful dishes. Except, that is, when his real job as detective inspector of police interrupts. And somehow his brilliant deductions always relate back to some lesson learned in cooking. Couldn’t possibly be made in America, but the perfect English whodunit.

If you’ve never heard of writer/director Alejandro Jodorowsky, then you’ve never seen just how horribly beautiful cinema can be. Many consider this film, released on American DVD/Blu-ray for the first time, to be his masterpiece. It concerns a young circus performer, mind shattered when his religious-whacko father hacks off his mother’s arms, who claws his way back to sanity with the help of his now-crippled mother and deaf-mute lover. But “sanity” in this world requires revenge. A gore-tinged ballet of despair and longing that will leave you dazed.

If there is a God, please let this truly be The Final Chapter. Originally shown in 3-D, this is the latest in the torture-porn series, highlighted by 11 brutal traps, each requiring a victim to mutilate themselves or another person to survive. But you already knew all that, didn’t you? Tobin Bell makes his usual from-the-grave appearance, with Costas Mandylor, Sean Patrick Flanery, Gina Holden, Cary Elwes, etc., as actors seeking a paycheck. We find no entertainment in these films, but if you do … seek help.

THE GIRL WHO KICKED THE HORNET’S NEST

Final adaptation of the late Stieg Larsson’s literary trilogy, with Noomi Rapace returning as the titular antisocial genius and Michael Nyqvist as her special friend. Now confined to a hospital bed after being shot in the head by her brother, and simultaneously on trial for murder, Lisbeth Salander (Rapace) must rely on Nyqvist to unravel the machinations of her assassin-father and his cabal of desperate men-in-high-places known only as “The Section.” By far the most satisfying and entertaining franchise of the 21st century.