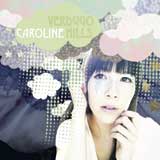 Originally from Okinawa but a globetrotter for much of the last several years, former Berklee College of Music student Caroline Lufkin has finally settled in Los Angeles and made her West Coast record. Named for the mountain range overlooking parts of the city, Lufkin’s third record is a batch of mini-symphonies neck-deep in a pool of electro-trance. Sounds hover and sway amid a voice so frail it evaporates and re-emerges like pre-dawn fog. Scattershot drums and padded synths in “Seesaw” crib portions of Kid A, and the mood stays comfortable and chill, less devilish than Massive Attack, with an occasional skittish turn (“Words Flutter”). Lufkin isn’t completely breathy, loosing a little volume here and there on “Pink Gloom.”