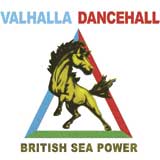 If there’s a Mercury Prize for toiling in unsavory conditions, many an independent act could compete, but British Sea Power would win. The 18-month recording process surrounding their fourth creation, on northwestern Scotland’s Isle of Skye, was a lesson in forbearance: battles with mice, frigid temperatures, wind and the tunnel vision that often accompanies isolation. Here, seclusion rewards. The resulting production on Valhalla Dancehall is markedly professional, which is ironic considering the band escaped to the woods to avoid traditional studio sounds. “Stunde Null” speeds along like futuristic post-punk, and “Mongk II,” with its doomy keyboards carrying the melody, recalls earlier and better Oasis. “Luna” is appropriately space-age. “Cleaning out the Rooms” careens toward bloated, but BSP has been writing songs long enough to know when to stagger their ambitious numbers with pointed attacks (“Thin Black Sail”).