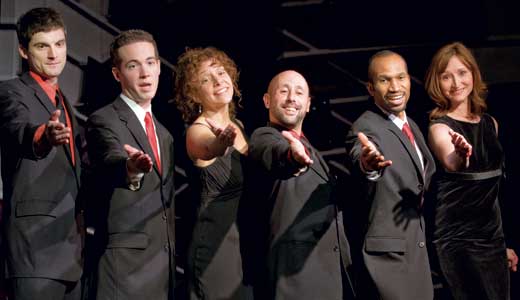 It Takes a ’Ville!
Presented by Second City and Actors Theatre of Louisville. Directed by Mick Napier. Continues through Feb. 6. For tickets or more information, call 584-1205 or visit www.actorstheatre.org.

Actors Theatre and Second City’s production of “It Takes a ’Ville!” is probably one of the most anticipated shows this year — I mean, who doesn’t love to talk about themselves? Heading into the Bingham Theatre, I wondered what sums us up and thought about all the little nuances we tell newbies about when they unload their moving trucks and settle into the area. I think everyone walked into the theater with an idea of what they expected, or what they thought should be included in the show — how they would sum up Louisville. I overheard some expectations and had more than a few of my own, but it would have been impossible to cram every single oddity into one evening.

The first thing I noticed upon walking into the theater was Ryan Wineinger’s lovely set, which exuded a feeling of history, tradition, a laid-back atmosphere … and bourbon. It was a perfect setting for a show that, while it might not have included every detail that makes our city tick, was right on with what it did include.

And this wasn’t just any old troupe creating a show about Louisville — it was the renowned Second City of Chicago, birthplace of some of the most talented and well-known comic actors, writers and directors of our time. The group sent two of its writers, Tim Baltz and Ed Furman, on a four-day mission to learn everything they could about the city. With the help of director Mick Napier and a talented cast (Lauren Dowden, Jennifer Estlin, Mitchell Fain, John Hartman, Anthony Irons and Steve Waltien), they created something just for us.

The traditional sketch comedy show included a barrage of inside jokes that started with the first word the actors sang — bridges. It seems they really did their homework, picking up on current events, as well as some quirks the natives might not even realize are odd. In addition to the scripted material, the actors improvised songs and scenes, entertaining the audience with quick wit and seemingly endless ideas.

It’s difficult to say too much about the content of “It Takes a ’Ville!” without giving anything away; being surprised was half the fun.

That this legendary troupe created a show about Louisville is certainly an honor. Regardless of what part of town you’re from, this show (much like this ol’ city) has something for everyone. And remember, they’re not laughing at us, they’re laughing with us …