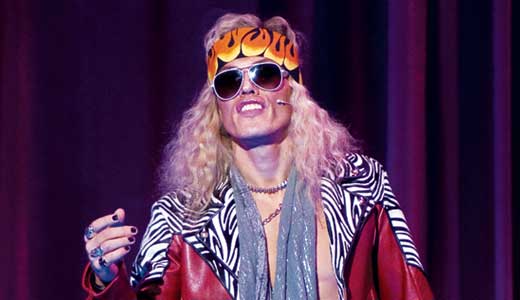 Broadway is breaking out the Aqua Net for “Rock of Ages,” which comes through town next week as a part of the PNC Broadway Across America series. The musical, which garnered five Tony Award nominations during its stint on Broadway, spins a love story to the soundtrack of ’80s glam/ballad rock, featuring songs from the likes of Journey, Whitesnake and Bon Jovi. Included in the touring cast is “American Idol” castoff Constantine Maroulis and Australian rocker MiG (rhymes with twig) Ayesa, who you may remember from “Rock Star: INXS” (he made it to third place). When not touring America in “Rock of Ages,” MiG is working on a soon-to-be-released album. LEO caught up with him in Orlando.

LEO: How’s the tour going so far?
MiG: It’s been a huge success. It’s been running on Broadway for more than two years, and now the tour has far exceeded expectations. We often wish we could stay longer in each city. The word-of-mouth spreads so fast, people can’t get a seat anymore.

LEO: What do you find most interesting about the flyover states?
MiG: Don’t you find that insulting? It’s been great, regardless. When we stopped in Cincinnati, I would jog from Ohio to Kentucky, and I remember thinking, How the hell did I get here? How did this happen? I have those moments. It’s a realization that I’m actually doing something with my life and going places I’ve never been to before. I’m getting to see the real America — the “flyover” states. I become a tourist whenever I get to a place; I take my camera out just to show the folks back home what it’s like living in America.

LEO: What have you heard about Kentucky?
MiG: They make fried chicken there … and it’s good?

LEO: Tell me about your role as Stacee Jaxx.
MiG: I like to call him a weapon of self-destruction. He’s the lead singer of the band in the show — and he does what a lot of lead singers do: thinks he can go solo. Thus starts his spiral downward into oblivion. It’s a great part. He basically thinks he owns the world, and he devours women wherever he goes — it’s the most fun I ever had playing a part. He’s a villain, but he’s a lovable rogue.

LEO: What’s the best thing about being in a traveling show?
MiG: Keeping it fresh every time. Doing this tour means that every week or so, we have a new opening night, we have a new theater, we have a new place to explore.

LEO: The worst?
MiG: Missing home. I have a wife who I see on Skype. We have a Skype relationship, which, you know, is better than the phone. It’s very hard on the road to be away from each other.

LEO: What’s your favorite song in the musical?
MiG: It would have to be “Wanted Dead or Alive” by Bon Jovi. It reeks of awesomeness in every chord. It’s clichéd without being clichéd, you know? It’s a typical big rock ballad.

LEO: Is Journey still a valid band after getting rid of Steve Perry?
MiG: Yeah, definitely. Journey has had a resurgence. These songs are all coming back, because I think people realize they weren’t just pop songs, they’re well-crafted masterpieces. A lot of craftsmanship went into these songs. When I had to learn the songs for the show, I really had to deconstruct them, and I realized how wonderful each of these songs are. They aren’t easy to perform — they’re intricate, and you gotta invest a lot of yourself in these songs in order for them to work.

LEO: REO Speedwagon or Styx?
MiG: I used to be REO Speedwagon, but now I’m Styx. Made the switch. I did have my first kiss to the soundtrack of REO Speedwagon — to the song “Can’t Fight This Feeling.” But since listening to “Renegade” and “Too Much Time on My Hands,” I’ve become a Styx fan.