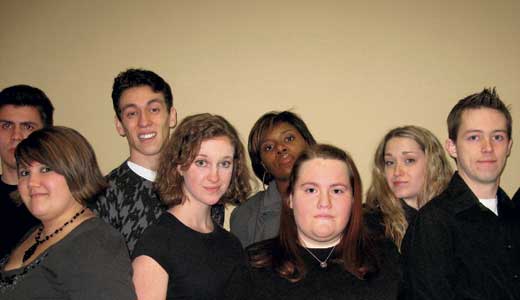 Pandora Productions is known for cutting-edge, flashy and fabulous shows that are rarely produced and often deal with sexual orientation. Whether it’s the gay version of “Cinderella,” a live production “The Rocky Horror Picture Show,” or even a pulp fiction show about an underground lesbian bar, Pandora has been delighting audiences with their original approach to theater since 1995. But once in a while, a piece is pulled from Pandora’s box that is a bit more serious and deals with the dark side of being a part of a community that is, even with all the progress that has been made, still subject to discrimination.

Their newest original production, “The GLBTQ Youth Project,” is stripped of their usual colorful sets and sparkly costumes and illustrates something personal for the local theater company.

About three years ago, Pandora artistic director Michael Drury had an idea for a show in which true stories of GLBTQ (gay, lesbian, bisexual, transgender and questioning) youth were collected and transformed into a theatrical piece, similar to “The Laramie Project” — Moisés Kaufman’s 2000 play crafted from interviews of people associated with Matthew Shepard, a gay Wyoming college student who was murdered in 1998.

Drury’s plan began to take shape when Pandora partnered with the Louisville Youth Group (LYG) — a community group for GLBTQ youth, and the University of Louisville’s Office for LGBT Services. The two organizations held writing workshops and interviews, during which participants told stories about feeling alone, coming out, conflict, acceptance and hope. The stories were then compiled and formed into a piece by playwright Kevin DelPrincipe.

“I was surprised at how open the kids were,” says Drury of the students who participated in the workshops. “And at how young they’re willing to be open … these kids who wrote really know who they are.”

The show, presented in a staged reading format, includes more than 50 characters based on the stories submitted by 20 writers. The piece is not organized into scenes; the stories are broken up and fade in and out of one another — much in the same way the themes and experiences they share overlap — and will likely sound familiar to most audience members, regardless of sexual orientation.

“The themes of finding yourself and sexual identity are really kind of universal,” Drury says. “We all have to come out in some way, regardless of our sexuality.”

The 11 cast members featured in this production have all appeared in at least one Pandora play and were selected by Drury to participate in the project. Given the serious and personal nature of the piece, Drury wanted actors with whom he was already comfortable. Many of the cast members, such as Ben Gierhart, expressed feeling particularly touched by the material. He found that he shared some of the same experiences as the writers.

“There’s one scene in the play where I have this high school crush, and I’ve written a note for him, and I’m sitting there debating whether or not I give the note to this guy,” Gierhart explains. “That really struck me, because that actually happened to me, and I never gave the note. In this scene, I actually give the note, so it was a really cathartic moment for me. I feel like I resolved something.”

The play is short, simple and powerful, with a few blocks and benches, minimal costumes to indicate different characters, and a handful of props. It is Drury’s hope that more pieces can develop like this, and he says he’s already thinking about the next installment. There will be a panel discussion after the show with various people involved in the project, including some of the writers. Drury and others are hoping for a large and diverse audience, because they feel everyone could learn something.

“I really want to see the kids the writers’ age come see this play, especially if they’re not in the GLBTQ community,” Drury says. “But I would also really love to see the older generation of the GLBTQ community come see how far we’ve come, and yet how similar it all still is. We have made progress. It would be great if we were making more — hopefully this will help do that.”