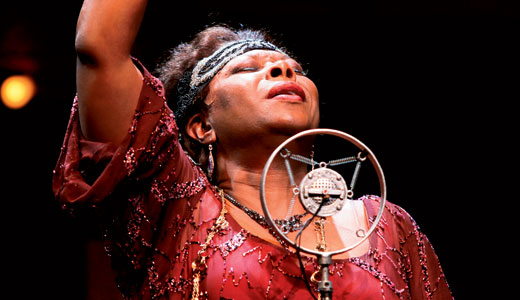 Ma Rainey’s Black Bottom
A production by Actors Theatre of Louisville. Directed by Ron OJ Parson. Continues through Feb. 13. For tickets or more information, call 584-1205 or go to www.actorstheatre.org.

If August Wilson’s dramatic project had been simply to examine and document the African-American experience during the 20th century — which he did over the course of the 10-play cycle, one for each decade, that defined his career — that might have been sufficient to cement his reputation as a lesser master, a niche playwright who could conveniently be stuffed in a narrow category.

Instead, Wilson mined the African-American experience for elemental ideas and emotions that he could fuse into the sort of compelling, universally applicable, theatrical magic found in “Ma Rainey’s Black Bottom,” now playing at Actors Theatre of Louisville. Directed by Ron OJ Parson and produced in association with the Milwaukee Repertory Theater, this is a brilliantly realized production of a seminal work; the first of Wilson’s plays to earn a New York audience, it earned a Tony Award nomination in 1985 and won the New York Drama Critics Circle Award for best play the same year.

Set in a Chicago recording studio in the late 1920s (gorgeously designed by Michael Ganio), the action plays out as a fictionalized account of an actual recording session where the legendary blues singer Ma Rainey (Greta Oglesby) and her band are laying down tracks for a “race record” to be released by a white-owned label. With indelible wit and vigor, Wilson uses the occasion to explore the nature of power and limitations of power and vulnerability, aspiration and fear, in a constantly shifting context of race, age, gender and temperament.

Much of the play focuses on the four musicians who comprise Ma Rainey’s band. It’s a brilliantly cast quartet, with some of the finest ensemble energy I’ve ever seen on a Louisville stage: Ernest Perry Jr. plays Cutler, the band’s leader, with avuncular moral authority and a humorous twinkle; Alfred H. Wilson brings a fierce, sometimes wayward, intelligence to Toledo, the pianist whose musings are steeped in Harlem Renaissance ideas; A.C. Smith brings a slumbering power to the role of Slow Drag, the bass player; and as Levee, the ambitious, egotistical trumpet player with a bemused contempt for his older colleagues, Anthony Fleming III delivers a fiercely mercurial and physical performance.

It’s as formidable a backup group as a star performer could hope to have, and when Oglesby brings the flamboyant, capricious and pettily demanding Ma Rainey to the stage, the combined forces burn things up, whether Rainey is pushing against white authority in the form of a policeman (Joshua Loren) and the white businessmen trying to manage and profit from her (Jonathan Gillard Daly and William McNulty), or managing the fractious relations among her musicians, with her lover (Erynn Mackenzie) and her stammering nephew (Jonathan Butler-Duplessis).

In addition to superb performances of a brilliant script, this production is noteworthy for its technical excellence. Costumes by Lorraine Venberg, lighting by Brian J. Lilienthal, sound by Matt Callahan, and music arranging by Kimo Williams. Finally, the musical values of this production are outstanding. The very real singing voices of Oglesby and Smith are powerful and effective, and in the many scenes that require it, the illusion of instrumental performance is perfect.