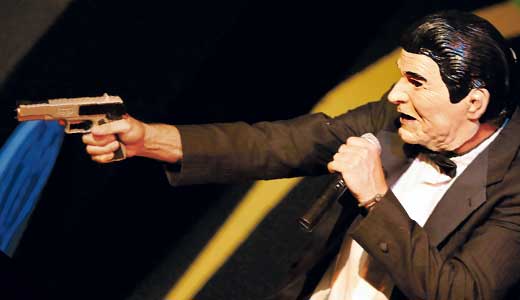 It’s like YouTube for the stage, which is especially useful with the ongoing shortening of attention spans. I don’t know if there will be cats or double rainbows or if anyone’s going to whip their hair back and forth, but the Apprentice/Intern Company at Actors, which has been working its ass off all season, has surely whipped up a tasty selection of short, sweet treats fresh out of the National 10 Minute Play Contest. Some of the works selected include “1984 and the Little Prince” by Ryan O’Nan, “Bear Foot in the Park” by Sarah Lunnie, “Holy Matrimony! (And Other Things to Do in Lieu of Saving the World)” by Zach Chotzen-Freund, and “Hygiene” by Gregory Hischak. The show is free, but call ahead for reservations. —Jane Mattingly

Nick Cannon started his career at age 16 by performing stand-up comedy all over Hollywood. He ultimately found success by way of Nickelodeon (in the sketch comedy show “All That”), MTV (improvisational comedy show “Wild ‘n Out”) and major motion pictures (“Drumline” and “Bobby”), all while dabbling in music and making a couple of hit records. He went on to become a permanent fixture in the entertainment lexicon — known more for his versatility than anything else — until three years ago, when his image was smeared all over the tabloids after he married a certain pop diva who is 10 years his senior. And then, a few months ago, the media-hungry couple announced Mimi was pregnant with twins, just as Cannon decided it would be a good time to return to his roots … which is exactly what is bringing him to The Improv this weekend. —Brent Owen

‘Everything is Metaphor’ by Keith Auerbach

“What do you think it is?” “I dunno, what do you think it is?” Don’t look to the artist for help in deciphering his art. Keith Auerbach’s abstractions, coupled with quizzical titles, are ambiguous at best. He does that on purpose. This may be art disguised as a Rorschach test, but my guess is we’ll have fun in the process. “I think metaphors are the midwives of meaning,” Auerbach says. “My intent is to evoke a moment out of the story of your life so you can find personal meaning in this experience. These colorful abstract images and their titles are suggestive, but vague enough to allow freedom and specific enough to evoke a response.” The opening reception is Friday, Jan. 14, from 6-9 p.m. —Jo Anne Triplett

Remember when Diane Sawyer was “weather maid” on WLKY? To David Inman, it’s part of the local cultural history of which he has become a hallowed guardian. “Incredible Inman” has struck a chord with his new book “Louisville Television.” The beautiful photo-laden volume (part of the Arcadia Press series “Images of America”) goes back 50 years and shows that we probably had more than our fair share of lovable and eccentric characters working for the local stations. Inman is appearing at Carmichael’s on Friday night to sign copies and share a few stories — maybe from the days of “Hayloft Hoedown” and “T-Bar-V Ranch.” Like most boomer babies, Inman appreciates the gumption and showbiz-trooper spirit of TV performers from the days before the mixed blessings that came with a plethora of cable channels. —T.E. Lyons

There has been a change of plans. Instead of performing “The Last Days of Judas Iscariot,” which has been moved to April, the Alley Theater is bringing back their popular live production of the totally gnarly ‘90s surfing movie. If you missed it the first time, now’s your chance to pretend you’re at the beach for a few hours instead of being stuck in this January gloom. It’s the same deal as last time, with mostly the same cast, and your dream of playing Johnny Utah may finally come true. You might get wet, you might get shot, and you might even have fun. You will be issued a poncho upon arrival, but the beach attire is up to you — and it’ll save you $2. —Jane Mattingly

The Little Colonel Players have been a steadfast fixture in Louisville’s theater community for more than 50 years, bringing beloved, charming classics to the stage. And it’s no different with their production of Ira Levin’s “Deathtrap.” It’s the story of an accomplished writer who tries to save his career after a string of flops. And what better way to revive one’s career than to steal another’s work and kill him? The longest-running comedy-thriller in Broadway history, this play within a play embraces all the best elements of thrillers and horror stories, of murder and deceit — it’ll keep you guessing ‘til the end. —Laura Morton

“It is a tragic mix-up when the United States spends $500,000 for every enemy solider killed,” said Dr. Martin Luther King Jr., “but only $53 annually on the victims of poverty.” Although the numbers need an adjustment for inflation, our national priorities, and therefore King’s message of socioeconomic justice, remain the same. In that spirit, a variety of Louisville-area events will honor the man (and his ideas) on his 82nd birthday: A lecture by Chicago’s Claudia Fegan on the merits of single-payer health care (Saturday, 3.p.m., Urban League Hall, 1535 W. Broadway, 636-1551); a speech by Congressman John Yarmuth on MLK’s impact (Saturday, 5 p.m., Magazine Street Seventh-day Adventist Church, 1942 Magazine St., 345-1654); and the Archdiocese of Louisville’s 26th annual community-wide MLK Celebration (Monday, 1:30 p.m., Cathedral of the Assumption, 433 S. Fourth St., 636-0296). —Jonathan Meador

Live television’s only strength is its role as a stage on which we can witness how terrible (that “She Bangs” guy) or talented (Susan Boyle) people are. The House Jacks, a five-piece San Francisco a cappella group, have appeared on NBC’s “American Idol” counterpart, “The Sing-Off,” performed at Carnegie Hall and old Candlestick Park, toured Europe 25 times and shared the dais with everyone from Bill Clinton to Run-D.M.C. You don’t walk through those stage doors with bad pitch. On their latest album, Level, The House Jacks simulate distorted guitars, strings and electronic drums on a menu that incorporates funk, pop and soul. This isn’t a reinterpretation of old-school beatboxing, which is proven by their willingness to take risks: Since 2000, The House Jacks have been jumping off the performance cliff headfirst by taking unrehearsed audience requests during shows. —Mat Herron

Though 2009’s Fiebre Tagada is getting a little long in the tooth, much of what Chilean dance magicians Picnic Kibun do will sound fresh Saturday when it makes its American debut at the Monkey Wrench. The trio formed in Santiago in 2006, earning the praise of Rolling Stone Chile and influential indie music blog super45.net for their kinetic live shows. Sexed-up party anthems rapped in English, Spanish and Japanese against a backdrop of digital rock and techno are the group’s milieu. Also on deck is longtime Louisville DJ and promoter Greg Giles, who has been on the grind throughout the Midwest for a minute, and electro-psych rock freaks Nerves Jr., who are preparing to record their debut album. —Mat Herron

A noteworthy preacher and civil rights leader who worked as a pastor with Dr. Martin Luther King Sr. and served with Dr. Martin Luther King Jr. in the Southern Christian Leadership Conference, Otis Moss Jr. will speak in Louisville Sunday at 7 p.m. as part of the St. Matthew’s Episcopal Church Dimensions of Faith series. Moss has twice been listed by Ebony magazine as one of “America’s best black preachers,” and Yale University chose him for the Lyman Beecher Lectureship on Preaching. He has served as an adviser to Presidents Jimmy Carter, Bill Clinton and Barack Obama. His visit, in association with St. George’s Community Center, coincides with MLK Day. —Robin Garr

There’s something about full moons, chocolate and “Steel Magnolias” that bring women together like nothing else. The latter two, well, no one knows exactly why. But the first has been happening since the days of cavemen, when women’s menstruation cycles were synced up with the moon and we’d leave the cave for a girls’ night out. Shine hosts a Full Moon Yoga gathering for women every month. The workshop, taught by Susan Schroeder and Holly Clark, includes yoga and meditation to honor the spiritual practice. “It’s a full moon goddess gathering: yoga, meditation, drumming, chanting, intention-setting, tuning into the powerful lunar energies and celebrating our heightened goddess energies,” Clark says. Beginners are welcome. —Sara Havens

The Carnegie Center is once again proving that quilts are not just for the bed anymore. Take the function (warmth) out of a quilt, and you’re left with the form (aesthetics) — i.e. art quilts. The juried artists used many techniques, including digital printing, piecing and painting. As long as it followed the very loose rule of “two or more layers held together with stitches,” it was eligible. The 31 quilts (out of 361 entries) in the exhibit come from fiber artists across the United States. Kentucky is represented by three quilts, with Vallorie Henderson the lone Louisville artist selected. The free exhibit programs include talks by two of the jurors, Rowland Ricketts and Joanne Weis. Visit the website for more details. —Jo Anne Triplett