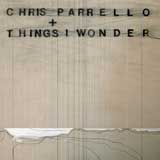 In the press release, leader/guitarist/composer Chris Parrello says his first CD is “probably a jazz record.” Or not. There are no bebop changes, no interpretations of classic jazz or American songbook tunes here. Rather, Parrello explores frequently dark and cinematic musical ideas of his own. Accompanied on most tracks by vocalist Karlie Bruce, Parrello employs both acoustic and electric guitars to create soundscapes that seem to invoke modern classical chamber music as much as jazz. The opening “Choices” is a good example, as the sound modulates from bright to foreboding, with Bruce’s wordless vocals and an increasingly insistent beat. Two exceptions to the overall sound of this disc are the Frisell meets Hendrix playfulness of “In Spite of You” and closing rocker “Welcome Home.” On occasion, Parrello is joined by other instruments, most prominently the cello work of Rubin Kodheli. It would be fascinating to see how these pieces open up live.