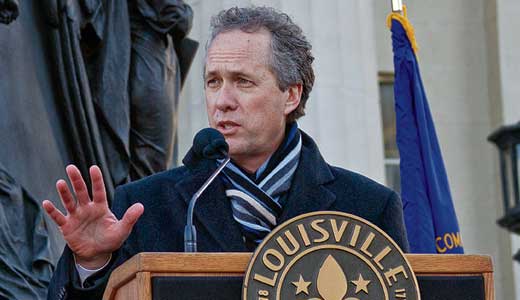 Standing in front of the old Jefferson County courthouse and joined by about 1,000 spectators, Mayor Greg Fischer urged individual action among citizens and “life-long learning” on the part of Metro employees. During the 10-minute inaugural address, Louisville’s 50th mayor also stressed the importance of showing compassion to neighbors, improving public education, building a healthier city, and increasing civic involvement.

“The future of our city, the relevance of Louisville as a thriving 21st century city is what’s at stake here,” Fischer said. “We will set our sights high.”

After narrowly winning the November election, Fischer has become the second mayor since city and county governments merged in 2003. In addition to working toward those aforementioned goals, the Louisville businessman faces a number of tough challenges, particularly with the upcoming budget.

The budget process is expected to begin around mid-February, and it will be Fischer’s first test to pay for his lofty campaign promises. The most immediate change that political observers may notice will be Fischer’s different approach to stitching together a financial plan.

“One thing Mayor Fischer will be doing is seeking more input from Metro Council and the public before he puts the budget together,” says mayoral spokesman Chris Poynter. “You’ll see him directly engaging with the council instead of what has happened in the past, which is largely the mayor saying, ‘Here’s my budget,’ and then the council takes it from there. They will feel more ownership of the budget than they have before.”

Still, there are serious obstacles, such as the 9 percent increase in the city’s payment to retiree benefits that was approved by the state last year. Though growth is expected, the revenue forecasts for the 2011-2012 budget are not yet in, and it remains to be seen how Metro officials will find the additional $6 million before the new fiscal year takes effect July 1.

The Fischer administration also is inheriting a decade-long legal battle between Metro government and a group of retired Louisville firefighters, who could receive millions of dollars after the Kentucky Supreme Court turned down the previous administration’s request for an appeal. The 140 retirees claim they are owed more than $17 million in compensation and interest due to miscalculated overtime pay over a 15-year period.

Those fiscal challenges are part of the reason Fischer’s partner in Metro government likely will be Councilman Jim King, D-10, a political rival who is set to be elected for another term as council president later this week.

A former mayoral candidate who lost to Fischer in last year’s Democratic primary, King served as council president in 2008 and has a number of supporters who believe he is best suited for the job as Metro government embarks on its first mayoral transition.

Some council members who are unsure about Fischer — a political novice — view King’s leadership as a crucial component to crafting a budget. There are also city lawmakers who believe that as the chief negotiator with the mayor, King’s command of public policy and ability to lobby veto-proof votes will give the council a critical upper hand in dealing with a relatively inexperienced mayor.

“Greg and I will work well together,” King says. “We both have a business career in our background, and he respects my abilities. There will be a good balance there.”

And though council members, community groups and neighborhood advocates are hopeful about potential development projects in the coming year, the Fischer administration already is curbing any high expectations and pointing to budget constraints.

“The fiscal reality is that there is not a whole lot of money to play with in this first budget. It will be a pretty austere one,” Poynter says. “The good thing thus far is that revenues seem to be on track with projections, so there won’t be any significant cuts as you’ve seen in the past. The question will be, what are the projections for next year? Plus, there’s a learning curve for Greg as this will be his first budget, so we want make sure we get it right and that it reflects his priorities.”

The 2011 legislative agenda for the council is foggy at this point, but expect redistricting council seats and expanding urban services farther into the old county to dominate the conversation.

One controversial debate that could make its way into a committee meeting is the fallout from an internal audit focusing on Councilwoman Judy Green, D-1, and her jobs-for-youth summer program in west Louisville — dubbed “The Green Clean Team” — that was the subject of a police investigation.

In December, an examination of the $55,000 grant that funded the effort found that 12 of Green’s relatives worked in the program and collected $3,580. The report raised more questions when the city auditor was unable to find $28,270 due to poor bookkeeping and discovered that Green and her husband, James Green, were running the program.

The results of the audit were forwarded to the Louisville Metro Police Public Integrity Unit; although no charges were filed against the councilwoman, a police report stated there was the “appearance that criminal activity could have been taking place.”

In the face of those serious allegations, Green has disputed the audit and indicated she will go forward with the program in the next year’s budget.

Since 2009, the Green Clean Team has been a line item in the city budget, but this controversy has subjected the council’s practice of discretionary and add-on spending to additional scrutiny. The results could see city lawmakers being pressured to do a better job of regulating how members use — or fail to use — taxpayer dollars.

“In Congress, they’re basically a self-policing entity. That’s one of the things that I’ve discussed regarding the audit — to set up some type of internal committee that’s balanced with Democrats and Republicans that will look at these spending processes,” says Councilman Ken Fleming, R-7. “The council needs to do a better job in terms of following up on the money that we allocate. It is very plain that when we go through and expend this money, we don’t have a very good system. It could really be anything we’re funding. There needs to be a stronger policy in terms of accountability on the discretionary money we spend from our accounts.”

Overall, council members wield a hefty purse of discretionary money that they spend with little questioning, including: $30,000 for office expenses; $75,000 in Neighborhood Development Funds to appropriate to nonprofits; and $100,000 in Capital Infrastructure Funds to pay for projects such as improvements to sidewalks and street paving.

The rules initially prohibited council members from giving area groups money directly from their heftier capitol fund accounts. According to the council clerk’s office, that money can only be funneled to Metro departments to shore up city services. In 2006, city lawmakers created a back door by allowing members to fluidly transfer capital funds to their neighborhood accounts, but oddly, the rules do not allow for council members to put additional money in their capital accounts.

Asked if the council needs to have tighter regulations on discretionary spending, newly elected Councilman David Yates, D-25, said the audit’s preliminary findings regarding Green’s jobs program did raise red flags. But the freshman councilman says he doesn’t know enough about the details to say whether the council needs to investigate further.

“I’m a big proponent of strong ethics, and I think there always has to be accountability for your actions. When you’re spending discretionary funds, people have to be very, very careful,” Yates says. “But I’m hoping that if she did make a mistake that it can be something other people can learn from. It’s important for council people to be ethical and to always come across that way because public perception matters. Once we talk to the councilwoman, I’m sure we can find a way that would make this work better.”