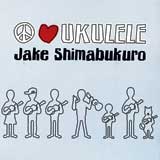 Retire “Bohemian Rhapsody.” Now. Forever. As if we’re not already numb to its charms, thanks to the visions of a head-banging Wayne and Garth. Even zygotes can recite Queen’s mini-opera by now.

Also, “Hallelujah ” has been covered so beautifully for so many years by so many artists that it’s hard to consider yet another version remarkable.

OK, onto the rest of the record: Hear ukulele, then smile. Hawaiian Jake Shimabakuro turns four strings into bells of happiness, and the appreciation for his dexterity speaks to the ukulele’s power. Pyrotechnics fly on “Bring Your Adz” and in the interplay between him and the violin on “Trapped,” but it’s on “Go for Broke” and “Pianoforte” that the gifted island statesman shows how emotive his work can be. Shimabakuro performs at 8 p.m. at Bomhard Theater on Jan. 28. Tickets for the all-ages show are $22.50-$27.50.