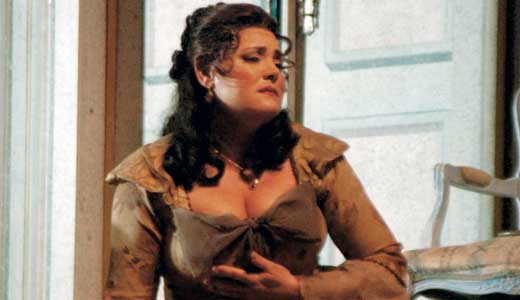 Soprano Kara Shay Thompson headlines Kentucky Opera’s annual “Carnivale” event Saturday night at the Marriott Hotel Ballroom — a preview salute to the company’s next opera season that carries the theme “A Night in Seville.” Two of the three operas Kentucky Opera will produce next season are set in that city of Spain: Bizet’s “Carmen” and Mozart’s “The Marriage of Figaro.”

The idea of previewing next season in the middle of January is a story in itself. While most musical groups are just reaching the peak of their schedules in January, Kentucky Opera completed its 2010 season with three major operatic productions last fall.

It’s a short-season model the Louisville company established several years ago that has worked like a charm. Unlike some arts groups that have been strained financially, the local opera company finished well in the black last year — and expects to do so again this year.

“We are in a very strong position right now,” says David Roth, the executive director of Kentucky Opera. “We are healthy. We are sound. And we have a financial model that is sustainable. But most important, we have an artistic model that is engaging our audience.”

Limiting itself to just three operas in a concentrated season has, indeed, proven to be a hit with Louisville audiences. Box office revenues, coupled with corporate and private giving, have covered the opera’s budget — with a surplus expected.

“Carnivale” provides the chance to extend the enthusiasm from the recent season, in a kind of preview of coming attractions — with a little fundraising thrown in. It’s similar to the way baseball never takes the winter off between seasons, keeping its fans’ interest stoked with ever-breaking news from the Hot Stove League.

Last year, the “Carnivale” was presented with a Japanese theme, with soprano Una Lee coming to town to preview her role in “Madame Butterfly,” the sold-out centerpiece of the 2010 season. This year, “Carnivale” decorates “A Night in Seville” with an appearance by Flamenco Louisville. Also on the bill, the promising young baritone Luis Orozco sings the famous “Song of the Toreadors” from “Carmen.” Orozco will appear as Escamillo, the toreador, when “Carmen” kicks off the 2011 season on Sept. 25. Signed to sing the lead role of Carmen is mezzo-soprano Tara Venditti, who is currently singing in Europe.

Thompson is slated to sing three arias from “The Marriage of Figaro,” in which she will appear Nov. 18. Roth says Thompson’s performance in “Cavelleria Rusticana” here in September was a highlight of the recent season.

“Kara Shay’s Santuzza was something you may never see or hear again,” he says. “From the incredible emotional arc she offered our audience, to the really thrilling sound she created in that music. Just a phenomenal voice. Everybody was blown away by her performance, and we’re just so fortunate to have her practically in our backyard. She and her family live in Cincinnati.”

The Kentucky Opera season expands a bit in 2011, with the company collaborating in operatic projects with symphonies in Owensboro and Bowling Green in October. The season’s third opera, “The Merry Widow,” is set for February 2012.