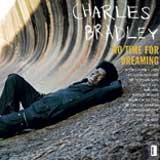 It’s telling when the best song is the instrumental. With the Ted Williams meme fresh, Charles Bradley could be a sentimental favorite. Hard-knock kid sees James Brown play the Apollo. Future is set, but he isn’t “chosen.” Pick-up bands pepper his career, but nothing takes off. Brother murdered, about to give up, meets musical mentor (Thomas Brenneck), and the gate opens. It’s a damn shame, then, that Bradley’s vocals are the album’s biggest fault. Not gruff enough to hang with Otis, not passionate enough to rival James, not a salesman like Ray, Bradley is just there through much of the affair. Who wins? Brenneck’s crew, the Menahan Street Band, which was behind last year’s Make the Road By Walking. “Since Our Last Goodbye,” the band’s showcase, is easily the best song on here.