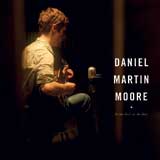 In the Cool of the Day comes out this year, but it could have easily been released in the 1920s, from the often traditional lyrics to the barebones folk and gospel arrangements. There’s plenty of walking double-bass, acoustic strumming and fiddle fills, but very little that stimulates. “In the Cool of the Day” is a haunting, lonely piano ballad, but it’s the only track that manages to stir an emotional connection. More representative is the breezy, boring “Up Above My Head,” featuring the line, In my soul, there’s music everywhere. For a track about musical inspiration, it’s oddly blank, as if he overdubbed his vocals after a yawny breakfast in bed. Moore has one hell of a voice: moody, bassy, full of expression, and he’s proven himself a capable songwriter in the past. Here, unfortunately, he revels in the kind of pleasant, inoffensive folk wallpaper only a church-going grandma could get behind.