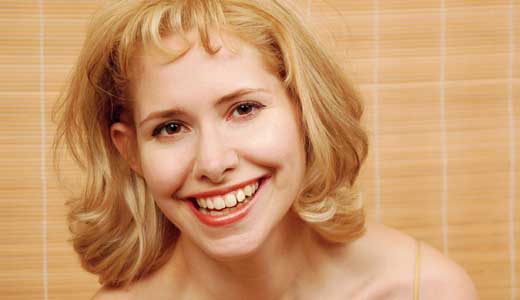 What a character. This New York City native has voyaged through an eclectic and downright unusual career. A former vocal jazz student at the Manhattan School of Music (she didn’t graduate), Nellie McKay has ventured into stand-up comedy, random acting gigs, a Doris Day tribute album and a rich body of original music, with notable contributions from artists like alt-god David Byrne. McKay appears at Headliners Music Hall on Tuesday. Brigid Kaelin opens.

LEO: Would you consider yourself, in your heart, a comedian/musician or a musician/comedian?
Nellie McKay: I don’t think either. Honestly, it’s kind of hard to put a label on yourself. I guess I’m just someone who’s trying to get by.

LEO: Why did you call your last album Home Sweet Mobile Home? It almost sounds like a country album title.
NM: I don’t know. I would hope that people who like country would like the album. Certainly, I like a lot of country music. I also like the sound of it. I think maybe mobile homes get stereotyped, and if people tend to think of one type of music when they hear that album title, maybe they should take another look. I know a lot of mobile homes are a lot more diverse than most people think.

LEO: It’s a pretty eclectic album — elements of jazz, indie rock, pop, folk and reggae. Do you consciously try to be eclectic, or does it happen naturally?
NM: The styles do just coalesce, and a lot of times, things start out much differently than they end up. “Caribbean Time,” for example, started off much more Spanish-sounding.

LEO: Could you talk a little bit about working with David Byrne on the album?
NM: What a gentleman. He’s a real prince, introducing me to all kinds of music, artists, producers and musicians. He’s just really generous and thoughtful. It was fascinating working with him on the Imelda Marcos album, Here Lies Love, just seeing the kind of thoughtful vibe he had in the studio, how he brought that all together — how he believed in his project and saw it through to fruition.

LEO: It might be a bit soon, but have you thought about new material at all? Any seeds planted?
NM: No, but if you know anybody who needs music for a movie or anything, I love my movies.