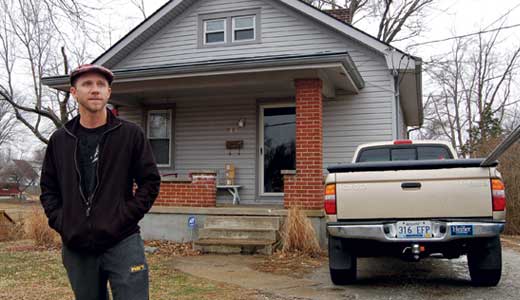 On paper, Nicholas Hoehler should have everything going for him in a country like America.

A native Louisvillian, Hoehler started his own business, Acclaim Renovation, shortly after graduating from Christian Academy High School. Within a few years of its incorporation, Acclaim would experience steady growth, enabling Hoehler to put $60,000 down on a $112,000, two-story home in Jeffersontown in 2007 at the age of 24, with half the down payment coming from an early inheritance courtesy of his parents. The remaining $52,000 Hoehler secured with a solid Wells Fargo mortgage, locking in an enviable 6.5 percent rate on the home of his dreams. So, being responsibly in debt as he was, Hoehler set to live out his middle-class American Dream in Louisville’s East End as so many others had done before him.

“Things were going pretty good then,” Hoehler recalls. “I was making my mortgage payments without a problem. I was even looking to shave a point off (my interest rate), take it down to 5.5 percent. At that rate, I would have my home paid off in about 27 years. I’ve put a lot of work into this place to make it my own, it’s probably worth a lot more now.”

But in the summer of 2008, the housing market — and, shortly thereafter, the entire national economy — went thermonuclear, and as a result, work for a home remodeler like Hoehler became scarce. The company he had been building began to atrophy as people across the state found it increasingly difficult to buy new homes, sell their old homes, or otherwise stay in the homes they already had amid rising unemployment. Hoehler laid off workers until his company’s ranks dwindled to two. To make up for the loss of income, he’s built an additional room so he can accommodate two roommates to pad his expenses, although not enough so that he can keep his health insurance, which he just canceled last week.

A full two years after the initial crash, Hoehler, now 28 and facing foreclosure, has a new full-time job: filling out all of the paperwork necessary to keep Wells Fargo’s lawyers at bay. At the same time, he’s running a business, working 50-hour weeks, and scrambling to get his mortgage modified to an amount that’s manageable within his new economic reality.

“They tell me every week that they need something new in terms of paperwork,” he says. “It’s worn me out. Another time they told me that they need my bank statements for all of 2009, my personal account and my business account statements. That’s a lot of paperwork. Each monthly statement has like six to eight pages to it, so I had to get all of that together.”

“Oh,” Hoehler continues, “and here’s the other thing: On every single one of these pages, I had to sign the bottom of the page, I had to date the bottom of the page, and then put my frickin’ loan number, which I’ve got memorized for good now. So I did this on a hundred-some odd pages and faxed it into them. You know how long that takes to send through a fax machine?”

Unfortunately, Hoehler isn’t alone: His home is just one of 7,540 properties that were in a state of foreclosure in the Louisville Metro area in 2010, reflecting a staggering 20 percent increase over 2009, according to the real estate website www.RealtyTrac.com. Nationwide, last year’s foreclosure rate was one in every 43 homes, which works out to a record 2,871,891 foreclosed properties in the United States in 2010.

Although Louisville’s housing market isn’t as radioactive as, say, those in Florida or Nevada, where speculative bubbles burst hardest, the ongoing recession and its plague of un- and underemployment reflects a national trend: Depressed individual income due to the recession has only fueled the foreclosure fire.

“The big difference that we’ve seen developing over the past few years is that as the economy went south, the nature of the problems that people were having, the reasons they couldn’t make their mortgage payment, changed,” says Stuart Pope, advocacy director for the Legal Aid Society. “And they were things like folks lost their jobs, or faced a big decrease in the amount of hours they worked. They might’ve had good jobs where they were working 20, 25 hours of overtime a week. Now that’s all they might be working, and it’s not enough.”

For nearly three years, the Legal Aid Society has hosted a regular legal clinic offering free advice and representation to homeowners facing foreclosure. Pope says that when the clinic started, it was once a week and would only attract a handful of people. Now, the twice-weekly clinic draws an average 15 per meeting.

Regarding those in Hoehler’s position, e.g., those seeking a modification to their mortgage, Pope says that because everybody’s trying to get one, banks are inundated with more paperwork than they can process in a timely fashion even though lenders are more willing to modify a loan than before the crash.

“And it’s frustrating,” Pope says. “The mortgage company will send a financial package, the homeowner will complete it and send it in, it sits there for a while. By the time somebody starts the process, they call the homeowner and say, ‘This information is out of date. We need you to send this to us again.’ There’s a big disconnect.”

According to John Brenzel, a foreclosure intervention counselor with the Housing Partnership, banks have been hiring just to keep up with the flood of mortgage modification paperwork.

“You have somebody like Chase Bank that has 30,000 (employees) that are working on foreclosures,” Brenzel says. “You’ve got Bank of America that’s got 20,000. Let me tell you, they hired most of them in the last 12 to 18 months. So they’re not very well trained. You try to call, the lines are busy, they automatically transfer you to someone in credit card collection who knows nothing about the mortgage process. We deal with that frustration every day.”

So does Hoehler, who estimates that he has lost at least an entire week’s work since he’s been in foreclosure in order to keep up with all of the additional paperwork, which is double for a small-business owner because they’re required to provide financial data on their company. All told, Hoehler has lost an extra $6,000 on top of the $6,218 required to bring his mortgage up to date — extra money that ultimately lines the pockets of Wells Fargo and their lawyers, Cincinnati-based Lerner Sampson & Rothfuss, which specializes in foreclosure cases.

But he remains confident that he’ll be able to pull his finances — and his home — out of the hole, and admits that were it not for the generosity of his family, who have been providing him loans to stay afloat, he would be “up shit creek, for sure.”

“I’m really lucky,” Hoehler says. “If my situation turns out to be a success story, I can’t imagine what it must be like for others … This is my dream home. It’s my first home, and I intend to stay.”